As the Pub Landlord, Al Murray famously said – if we had no rules, where would we be? France! And if we had too many rules where would we be? Germany! So travelling up the French-German border we were taken by surprise to find a little island of Teutonic efficiency and regulations in Colmar. More of which later…

We’d decided to follow the Route des Vins wine trail through the Alsace region on the advice of a French couple we’d met. Probably not the best idea as I’m only familiar with two famous French wines: Rouge and Blanc. That said, the countryside in this area is beautiful – rolling hills clad with terraces of vines basking in the sunshine. It’s much more rounded and gentle than the Alpine regions we’ve been driving through for the past few weeks.

When we last posted, we’d just arrived in Thann at the start of the trail. Our free aire backed on to a chuckling stream and was only a few minutes from the town centre with its ridiculously ornate church. This gothic monstrosity looked like an explosion in a statue factory with apostles and various demons clambering up its walls. The only thing they’d forgotten was a little bit of icing on the top…

Thann will always be remembered by me as the place where we had our first Chinese takeaway in four months – yum! Two poulet citrons et riz cantonnais please Madame. Delicious. In conversation with the owners we discovered that they’d fled to France over forty years ago to escape the Khmer Rouge in Cambodia. Time and again we meet people on our travels with stories to tell which make us so thankful for the lives we lead.

From Thann we took a short run up to Guebwiller – on the French-German border so many towns sound Germanic – where Vince nearly had a haircut. I was very pleased with myself at negotiating him round a really tight car park. When I got out to admire how well I’d done, I spotted that the lamp post beside our space had three globes, like a letter T, and one of them was about half an inch above the roof eek! If I’d parked in the next space, his TV aerial would have smashed it to bits… Note to self: look up as well as in both mirrors.

Our final destination for the day was Colmar. What a fantastic town – so different to everywhere we’ve visited so far as the architecture really reflected the German influence. Half-timbered houses, all in different colours, some leaning at ridiculous angles, canals, generous steins of beer being served, the sound of oompah bands wafting in the breeze…. Add it to your list if you’re ever in this part of the world. We even fed chunks of bread to an albino coypu who seems to have made its home in the canals of the ‘Little Venice’ part of town.

The only shock to the system was our accommodation. Our guide mentioned an aire in the Port de Plaisance – a marina on the canal network. It sounded pretty good despite the €15 charge as it had showers, loos and electricity included. What we weren’t prepared for was Helga the Viking receptionist. Ve haf many rules here. Ze toilets und showers vill be closed at 5.30pm precisely. You tourists make such a mess ve cannot leave zem open all nacht. Ze gates are locked at 7pm precisely. No vehicles may enter or leave until 8.30am precisely. If you overload ze electricity it vill NOT be reset until ze morning. You vill dump your vaste between 8am und 9am. If you are vanting bread it is on sale from 8.30am until 9 und not ein minute after. Poor Gill got a right telling off for leaving the light on in the loos..!

After that we needed a regulation-free night so we headed for Metz and parked in a free aire outside their municipal campsite. This was a handy spot beside the Moselle River which flows right through the city. I’d always avoided Metz on previous French trips as my impression was that it was just a stop-off city on the motorway south. I couldn’t have been more wrong. We didn’t do much yesterday afternoon when we arrived as it was pelting with rain. A quiet night in with a movie was the order of the day. This morning however, we ventured out in the sunshine to find a clean city with wide boulevards, amazing architecture and bridges, bridges everywhere. We passed some time in the magnificent cathedral, then browsed around the covered market, inspecting hundreds of cheeses and some rather disgusting bits and pieces which once belonged to chickens, rabbits and pigeons. We beat our previous record for expense when we found some truffle-based Brie at €98 per kilo and some dried ham at €199 per kilo!

We had a young German couple parked beside us in the aire who seemed to be having a good trip in their tiny camper-van. We had to chuckle when we saw them sneak off with towels held behind their backs for a dawn raid on the camp-site next door. We chuckled even more when they were caught by campsite reception and had to do the walk of shame back to the aire without a successful freebie use of the campsite’s facilities! They should have consulted my lovely wife who managed to do it successfully in Arromanches…

We continued the big hops north today by heading for Bastogne in Belgium. When we arrived at the free aire there we weren’t very comfortable with it as it was just a city car park close to a not very salubrious-looking part of town. We’ve always said if one or other of us isn’t happy with a stopover we’d move on, so that’s what we did. Another 30 minutes into the countryside took us to the Barrage de Nisramont – an artificial lake formed by a dam providing hydro-electric power to the Belgian National Grid. It’s extremely peaceful; although there’s a bar and a visitor centre, it’s closed for the evening so we had a gentle walk in light rain over the dam and into the forest. There are only four or five vans here so we’re looking forward to a good night’s kip lulled to sleep by the sound of the river behind us. I hope you have a peaceful evening too. 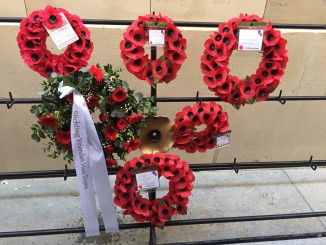 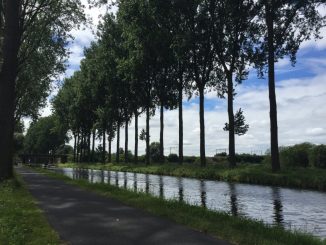