Well this is a first. I don’t think I’ve ever written a blog post sitting in a park before. We’re in Rothenburg ob der Tauber in northern Bavaria. It’s hot hot hot so we’ve just had our picnic lunch in the castle gardens surrounded by the scent of roses. And not just roses – there’s a hint of rosé too. Not every pensioner’s thermos flask contains tea, you know! What a stroke of genius that was, so cool…

Virtually everybody who sent us recommendations for places to visit on this trip mentioned Rothenburg. It has the toughest planning regulations in all of Germany, and I can see why. The medieval half-timbered buildings look as though they haven’t changed since the 1500’s apart from a coat of paint or two and the streets still bear the ancient cobbles travelled by horse-drawn carriages and merchants’ hand-carts. It’s so picturesque.

The town walls are still intact and you can walk right round the old town on them, admiring the old timbers which still support a roof with Hansel & Gretel style tiles. There’s an open all year Christmas shop containing twirling Christmas trees and dozens of jolly Santas. Very strange when you walk in off the 28° streets. It’s a wonderful place to stroll around soaking up the sights and sounds of a town which has welcomed visitors for hundreds of years.

On a practical note our Stellplatz is right outside the town gates so no bicycles were needed, it’s a very short walk to the main square with its street cafés and ice-cream parlours. I didn’t know until we came here that the Germans are really into their ice-cream! Yesterday we decided to eat out. We chose the local specialty – home made game bratwürst with lots of mustard and cold mashed potatoes. Interesting. It was very tasty after the first glass of wine, and our waiter couldn’t have been more chatty. When he realised we were British all he wanted to talk about was Midsomer Murders! He told us that locally, everything shuts down on a Monday night for Inspector Barnaby (as they call the programme here). The local mayor has even written to the BBC to see if they’ll come here to record an episode.

Seriously, if you ever get to tour the area, you really must stop off in Rothenburg. I apologise for all the pics – but it’s so photogenic!

So what else have we been up to since our last chat? We tried to find a vineyard stop which we’d seen on a Facebook review. Apparently you can stay for free but it’s good manners to buy a bottle or two while you’re there. We read that the owners were happy to show you round for a tasting too. Unfortunately when we arrived, it wasn’t there. We checked that we’d entered the coordinates in the satnav correctly – we had – but all there was was an empty country house at the end of a very narrow, non-Vince friendly track.

Out came the park4night app again and we pointed Vince at the next major spa town, Bad Dürkheim. This turned into another of our favourite stops this trip as the Stellplatz was once again just on the town boundary so we were only a short stroll from the centre. We parked up for a couple of nights in the shade of the trees with plenty of room to wind out Vince’s canopy so we could eat and drink outdoors. Bad Dürkheim has several claims to fame, the most obvious was visible from our pitch. Smack in the middle of a wine-producing Mecca, Europe’s biggest wine cask, the Dürkheimer Fass, sat just across a car park from us. Originally able to hold 1.7 million litres of wine it was never actually used as such; it now contains a restaurant!

The prices were a bit too salty for us so we wandered past the saline springs, whose pools are currently closed for renovation sadly, and into town for yet more ice-cream. Our lpg gas was getting a bit low by now. Not critically low, but we try to fill up when we drop below half a tank as more and more garages are abandoning lpg as a fuel so it’s getting harder to find. Cue utter panic when I checked online which adaptor we needed in Germany. Apparently we needed an ACME adaptor to screw to Vince’s filler for the garage hose to connect to. I cycled to the local caravan shop to see if I could get one, without success. We looked at getting one sent over via Amazon, or even scooting over the border to France as we always have French and Spanish adaptors on board.

Thankfully after a rummage in one of Vince’s rarely used cubby-holes, 2022 Ken gave thanks to 2016 Ken because there, covered in dust was just the adaptor we needed. I must have covered all bases when we were equipping the big fella for our first trip abroad. Relief!

Full of lpg gas, diesel and water we headed for Baden-Baden at the gateway to the Black Forest. To be honest we didn’t really do it justice. We arrived at lunchtime in mixed weather so made a mad dash into town on the bikes between showers. What didn’t help matters was that we’d bought Gill a bike from a Facebook group before we left, and we didn’t realise that the brakes were binding. Poor Gill felt like she cycled uphill all the way there and uphill all the way back again! She was exhausted. I spent the rest of the afternoon in mechanic mode sorting it out. Fortunately all is now well and the wheels spin freely.

From Baden-Baden we wanted to take one of my favourite German roads, the B500 through the Black Forest. I’d done it a few years ago on the motorcycle in the rain, and even cold and drenched it was a swooptastic few hours of fun. It’s a whole different ball game in Vince of course, trying not to spoil the fun for all the bikers who caught up with us. Even so, the bends and the views were spectacular and the trees went on forever. We peeled off to the town of Alpirsbach on the banks of the river Kinzig. Mining and logging seemed to be the thing here, but as it was Sunday, everything was closed. The only thing we could do was gracefully accept a free beer each at the campsite reception and relaaax.

The town of Freiburg lies almost as far south-west as it’s possible to go in Germany, and this was our next stop. The signs directed us to a huge parking lot by SC Freiburg’s flash football stadium. Luckily they weren’t playing at home when we visited as all the travellers are unceremoniously turfed out each time they do. It was a pretty soulless concrete wasteland to be honest, not a very inspiring place to stay.

The local trams terminate at the stadium so it was an easy job to hop aboard, stick a €5 note in the machine behind the driver and head for the Altstadt, the old town centre. I’m ashamed to say we let the side down on the tram. We’d set off on the trundle into town before we noticed that every single person in our carriage was wearing a covid mask. We hadn’t seen a single mask in three weeks of travelling but apparently it’s mandatory on public transport. We felt so conspicuous.

Next time, fairy-tale castles, hat misadventures and a ringing in our ears. Whatever next?
See you then xx 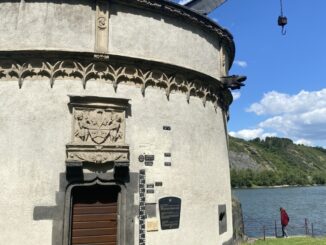 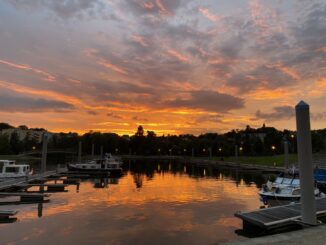 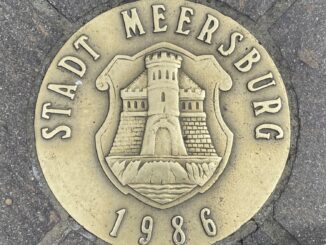