We were sorry to leave Vila Chã. We’d been there five nights – the longest we’ve stayed anywhere on this trip to date. The time was right however, so yesterday morning we rejoined the A28 and drove north. Along the way we had two missions to complete; a stop-off at the nearby outlet mall for trainers for me, and a supermarket sweep as we were down to those usual last sad items left in the fridge. Yes I’m talking about the wilting celery, the smelly cheese which seemed a good idea when we bought it, and the garlic which is showing green shoots…

The shopping mall was less painful than I’d feared. I’d decided to man-shop i.e. ‘Those shoes look fine, do you have them in my size? Yes? Thanks, I’ll take them.’ Rather than lady-shop which seems to involve going to ten shoe-shops trying on dozens of pairs before finally settling on the right ones which turn out to be the wrong ones, (those red ones were much nicer), and going back to exchange them the next day. We were in, parked, trainered-up and out again in under 40 minutes. Result!

As we approached an exit off the A28 motorway a little later I saw a sign which I thought looked a bit supermarket-like so we swung off to give it a try. We’re not familiar with the Portuguese equivalents to Sainsbury’s and ASDA so for all we knew it could have been a DIY store, or god-forbid another shoe-shop. Fortunately our instincts were correct and we were able to stock up with some essentials for the next few days. One of the odd things we’ve discovered on our travels is that these foreign types don’t seem to have the same taste for fresh milk as we do in the UK. Finding fresh, rather than UHT milk is quite a task in France, Spain and in Portugal. There’s usually no more than a dozen cartons on display, and if you can find any semi-skimmed, you’re really onto a winner. Most odd.

Our destination for last night and tonight was Vila Praia de Âncora, a little further up the west coast of Portugal and not far from the Spanish border. We’d found a nice cheap ACSI site by a river and not too far out of town, as long as we didn’t get arrested before we got there… We’ve been having a heck of a time with the motorway tolls in Portugal. Everything we read says that you must register your credit card and vehicle registration number at the border so that the automatic number plate cameras can charge you automatically. It’s a great system which avoids the holiday queues at the toll booths which we’ve encountered occasionally in France and Spain. Our problem was that, as you might remember, Mr Garmin took us into Portugal over the mountains on tiny roads – so the ‘border’ was a boulder at the side of the road with a sign on it which said er… ‘Welcome to Portugal’!

We’ve driven under so many toll gantries since then we must be racking up fees to rival the country’s national debt but can we find anywhere to pay? Not a hope. We’ve asked at service stations along the way but people look at us as if we’re mad; we’ve tried the internet payment system but it doesn’t recognise our registration number. I believe you can pay at post offices but we haven’t seen any, so we don’t know what to do. The gossip here says that there’s no exchange of information between the UK and Portugal so we can’t be chased up for fines at home, however the unpaid charges stay on the system for five years so we’d better change our number if we come back! It’s not that we don’t want to pay but the authorities seem to make it as difficult as they can, very frustrating.

Vila Praia de Âncora is a real find – the campsite is basic but fine in every way, we’re parked in the shade under some enormously tall eucalyptus trees right beside the river Âncora. A twenty-minute walk takes you into the centre of the town. It’s a bit of a 1970’s explosion of concrete along the main drag, but mostly clean and white and with splashes of colour from the small newsagents, bars and cut-price clothing shops along the way. Diverting off the main road – literally on the other side of the tracks as you have to look both ways and run like billy-o over the railway – leads you to the town’s redeeming feature which is its seafront. There’s a busy little harbour; for once an actual working fishing harbour rather than a marina full of rich folks’ toys, and a long, long white sandy beach bisected by the river as it flows into the sea across the strand. It’s ideal for families as the little ‘uns can splash in and out of the river safely while the massive waves are surfer-dude heaven. And we saw plenty of them. At least, Gill did – she was constantly distracted by wide-shouldered, bronzed young men with sun and salt-bleached hair displaying their six-packs with wet-suits tied around their tiny waists. I’m sure she was thinking very much of me in my younger days.

I’m ashamed to say that all we did today was enjoy a lovely catch-of-the-day lunch (cod) with a gallon of Sangria then spent the afternoon on the beach, soaking up the rays, reading and attempting to swim in the absolutely freezing surf. We’ll try to introduce a bit more culture soon as we’ll be on the Pilgrim Route to Santiago de Compostela in Galicia in a day or two. Our next stop however is another beach resort so we may have to suffer yet another few days of eating, drinking and lying around in the sun. It’s a tough job but…well you know the rest… 😉 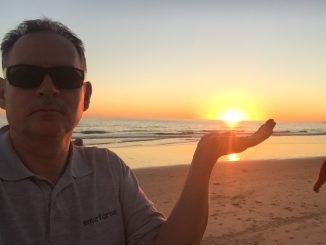 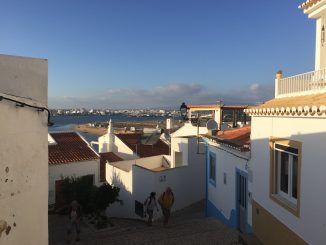 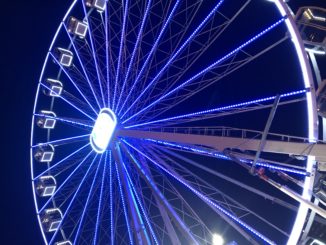 …and in a packed programme tonight…

4 Comments on Sun, Sea and Sand-gria