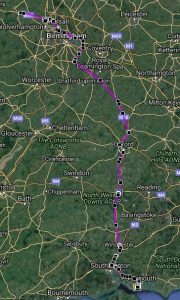 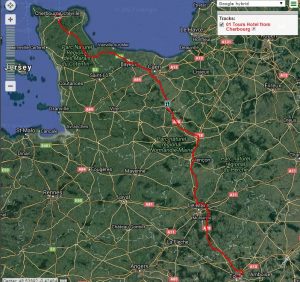 Whose idea was it to get a 9am ferry from Portsmouth? Oh. That would be me then. As I missed the guys’ Euro trip last summer due to the original Travels With Vince, they kindly tasked me with organising the trip this year. Regular readers may remember I introduced my biker friends when we met up with them on their travels (and ours) in both Spain and Belgium last summer.

Friday was spent packing up the bike – a much simpler task than getting Vince ready as there’s only room to take a few changes of clothes, a credit card and a toothbrush. At least this year we’re staying in hotels rather than camping so I don’t have to take a big bag with all the camping gear. To be honest, after time away in the motorhome I’m not really keen to get back into a damp draughty tent ever again.

Bike tours these days are a far cry from heading off in your trainers with a map in the pocket of your leather jacket as we used to in our teens. Nowadays we ride ridiculous go-anywhere adventure bikes of 1200cc with satnav, cruise control, heated handlebar grips and even – in my case – a heated seat to take the chill off! They offer a comfy perch to see the world from and all the oomph you’ll ever need to get past those sluggish camper vans on the mountain passes. Ooh did I really say that..? We even have Bluetooth headsets which connect to the satnav, the phone or iPod and which enable us to chat to each other instead of using frantic sign language.

With apologies to the neighbours I set off at 3.15am this morning to meet Gordon on the M54, then we caught up with Pete & Dave for a coffee at Chievely services on the A34. It was a pretty uneventful run down, no traffic to worry about at that time, so apart from a small diversion around a closed slip road on the M42 we made excellent time. We only saw one other biker on the way down as we exited a 50 limit into a 70 – his bike was so loud when he flashed past that he actually woke me up from a cruise-control induced stupor. Thanks fella.

After checking in at the ferry port we were waved aboard. Quite often the bikes get taken on first which is what happened this morning. The up side is that we’re always first to the canteen for a full English, the downside today was that the only option offered was a continental breakfast – tragedy! How’s a man supposed to ride all day on a bit of soggy croissant and a fruit juice? The crossing was a little choppy so we all crashed out, our slumbers disturbed only by the obligatory crying baby and a posh fella with the most annoyingly loud voice who held the whole lounge in thrall with his endless boring chat. Our withering looks soon encouraged him to belt up.

Paul and Ken (another Ken just to confuse things) took a different ferry to the four of us with a plan to meet on the road in France at a random McDonalds just off the dual-carriageway to Tours. We had a bit of trouble finding it as my satnav just took us to an empty field! Fortunately it was near a filling station so we tanked up and took the opportunity to ask Mr Google where the McDonalds was. We waited there for the allotted 45 mins but as there was no sign of Ken & Paul we continued in pouring rain to Tours.

Our last half hour was much more pleasant as the sun came out and the temperature rose to 20° which allowed us to gently steam dry as we arrived at the hotel.

A quick wash & brush-up later, we headed out for something to eat. After the early start we really didn’t want to walk miles into town so it was the local restaurant, yards from the hotel which benefited from our tourist dolla. There’s nothing like the first pint to a thirsty biker – or the second, or third… Ken and Paul finally appeared after their delayed ferry so more beer was drunk to celebrate the fact we’re a full team at last.

We have another long run to Périgueux tomorrow but we won’t be getting up too early – here’s hoping the weather is a little kinder to us.