I take it back. It seems that some of that tropical English weather has actually made it all the way up here to Scotland. We’ve been basking this afternoon in ooh, at least 15°, wow! 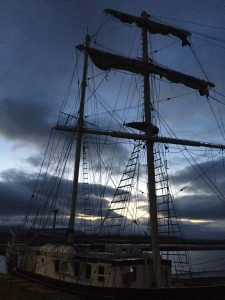 We had a quiet night last night in Glencaple, sleeping like logs after our walk along the estuary, although the beer might have helped a bit too. After I’d uploaded last night’s post, the sailing boat in the harbour made a fine photo against the sunset so I’ve added it here. After all, readers who’ve been following our travels for a while might have spotted a bit of a trend for sunset pics.

Our morning, rather annoyingly, was spent resolving issues around our building project. Somebody has come along at the last minute and said we have to move the planned driveway along the road a bit – which would be fine but it seems we have to move all the connections to the gas, electric, phone and water as well d’oh! But enough of that; let’s just say a few terse emails were sent and we’ll see what happens.

Our stop for this evening involved going north to cross the River Nith before heading south down the Solway again to Carsethorn. As we had to go via Dumfries we decided to top up with gas. There’s only one LPG garage in the area, but all winter whenever we stopped off there their pump was out of order so we had to go miles out of our way to make sure we had enough gas for heating and hot water. No big surprise, we pulled up beside the pump today to find it’s still out of order. I drove Vince out in a bit of a strop, which wasn’t helped by having to go the wrong way – a right turn out of the garage would have taken all day as it was really busy. We found a place to turn round in an industrial estate and headed back past the garage, where I spotted from the corner of my eye that there was no out of order sign on the other side of the pump. We turned at the roundabout and went back to find that all we needed to do was pull the hose round from the ‘wrong’ side of the pump and we could help ourselves to lots of lovely lpg. I have a horrible feeling that this would have worked all winter. Shoot me now.

Glossing over my complete stupidity we are now parked outside the Steamboat Inn by a rocky beach in glorious sunshine. There’s a quaint Scottish expression about going to the pub and getting absolutely steamboats, but we’ll be on our best behaviour, honest. Yeah who needs to go to the pub..? We have plenty of booze on board. Kidding! Yes we really are going to the pub for dinner.

I think we deserve a treat as we had a good walk today. Well I say walk, it was more of an adventure. We inevitably missed the turn off for a gentle walk along the lanes to Powillimount Beach and found ourselves on the very rocky beach. More worrying was the fact that the tide was coming in and the beach was getting narrower and narrower forcing us up onto the large rocks at the foot of the steep banking up to the fields above.

We clambered our way along, sometimes on the rocks, sometimes on the boggy briar-laden margin beyond until we saw what we hoped was a way back on to the path. We were slightly mistaken as we found ourselves trespassing in the magnificent gardens of a stately home. We crept along behind hedges, whispering as we decided which path to take, and expecting to hear the gamekeeper’s shotgun announce that we’d been spotted. Fortunately we escaped without being peppered with buckshot and wandered back along the lanes we should have taken in the first place. Never has Vince looked so welcoming when we finally made it back.

I’m off now for a quick wash and brush-up before dinner at the pub and we’re off home in the morning, so thanks for joining us on this quick trip. We aim to get away for short breaks as often as we can while we sort out our build, so keep an eye out for updates. We hope to head into Europe again when our planning application is submitted as the process can take months. That should give us enough Vince-memories to keep us going through the stress of the build.

As always – we’ll keep you posted!

6 Comments on Getting Steamboats…