Well that was quite a weekend! We thought we’d try out a newly-fettled Vince by taking him off to Brighton to our soon-to-be-son-in-law Jim’s stag weekend. Originally I was going on my own, but Gill decided she’d better keep an eye on me, because where me and strong drink are involved – it never ends well…

Early Saturday morning saw us waking all the neighbours as Vince coughed and spluttered into life and reversed off the drive. We live on a hill so a stealth exit is not an option – sorry folks! I imagined curtains twitching open and people commenting on what a misty morning it was as the diesel smoke slowly cleared and Vince receded into the distance. The journey from Telford to Brighton was pretty much motorway all the way so we set the cruise control for 60mph and relaxed. The STBSIL and the rest of the crowd had arranged to meet in a pub in central Brighton at twelve, but we soon realised that the heavy traffic on the M25 and M23 would make that a tough deadline.

As it turned out we rolled into the Caravan Club site by Brighton Marina just after twelve but had to set Vince up and have a quick bite to eat before heading out. When I booked the site, I chose it for its proximity to the town centre but I must have been using a small-scale map as it was a good hour’s walk away! I had to resort to jumping on a random bus to get there before the group moved on – we had a 2pm booking for Footgolf. Yes, you read that right – 12 lads and three old farts were about to play Footgolf for the first time.

I arrived just as they were leaving the pub, so no beer for me. Probably just as well – my bladder, you know. Taxis were hailed and I’d like to say we roared off into the countryside to the next event. I’d like to, but I can’t as Brighton is even more anti-car than Edinburgh where I grew up. From dawn to dusk and beyond, the city seems to be at a standstill with every street full of endlessly queuing cars. We were trying to reach Waterhall Golf Club, a regular golf club which has a side-course reserved for Footgolf.

The idea of Footgolf is to get the ball in the hole just like golf but with – you guessed it – a size 5 football. All the usual golf rules apply but you have to kick the ball rather than swing a club at it. I was a bit worried as I haven’t kicked a ball in anger since, well, never actually. At school I was the guy who was always picked last for the team and told to keep out of the way. I needn’t have worried – although some of the guys took it seriously with shorts & proper sports footwear, the high winds and wet grass meant that our balls went in all directions if you’ll pardon the phrase. Typically when the STBSIL Jim crouched with his camera to take an action shot, I slipped and ended up on my backside sigh… Fortunately he hasn’t sent me the pic yet so I can’t post it here for your ridicule. Shame.

We’d split into three teams of five, called Dick, Duck and Dive. I’m pleased to record that I was a Duck or this could have been embarrassing. I can’t tell you who actually won because the outrageous cheating by the other two teams meant that our own amazing score was called into question. How dare they imply that our integrity sank to the same depths as theirs? I find that very offensive.

After a celebratory drink or two the group split up to return to the town centre where they’d booked a hostel for the night’s accommodation. There was zero chance of me staying in such a place at my advanced years so I bade them farewell to zip back to the campsite for a Vince shower & shave before the evening’s event – a meal and a show at the comedy club Komedia. Did I mention the traffic? I think I did. As a result I wasn’t zipping anywhere. We’d been warned that the club operated a tight schedule and so it proved when I arrived at 7.15 for a 7pm show. They wouldn’t let me in despite some shameless begging and crying on my part. I was about to pick my dummy up and flounce back to the campsite when three of the other guys arrived. I love the younger generation these days – so laid back. They said ‘Yeah, whatever, let’s have a beer and get in at the interval.’ So we did!

We only missed the first act, but got downstairs in time for food and the next two comedians. What a hoot! I haven’t laughed so much since our drunken disco. One of the comics targeted a member of the group and I suspect he still doesn’t believe that our companion really was American, really was called Dingus, and genuinely had only met the groom that day 😀 He’d come over from Thailand with the best man to see what an English ‘bachelor party’ was like. The comic thought we were winding him up but it was all true, I swear.

With old age comes responsibility (eventually) so after the show, I decided I’d had enough to drink. I’m so weak-willed that if anyone had offered me more I would have accepted so I decided to bale out and head back to Vince for at least a few hours sleep. Despite being carried against my will to the next pub by one of the party – and I’m no lightweight – I managed to board the night bus and take my leave. Walking back to the site I nearly tripped over an urban fox (as opposed to an urbane fox like the one in the bingo ads) who was rooting around in the bins. These guys aren’t shy at all are they?

Once the paracetamol had kicked in, we had a very pleasant sunny Sunday exploring Brighton. The London to Brighton Land-Rover run had just finished so we wandered along the sea-front admiring all the vintage and customised 4×4’s parked up and being lovingly polished by their owners. A huge bacon roll with extra brown sauce was a welcome bonus. The last time Gill and I were in Brighton was before we were married – there were two piers then but sadly the West Pier was washed away many years ago. We still found time to explore the remaining pier and it took us back to our childhood with Brighton Rock on sale, the funfair, the deck chairs and families having fun together despite being robbed blind for ice-cream.

We had a lazy afternoon back at Vince with the awning out to shade us from the unseasonal October sunshine. We’ll be having a quiet word with our dealer though. The new awning clearly hadn’t been tested before we picked him up last week – it winds out and retracts perfectly but the two telescopic support legs which take its weight when extended, wouldn’t lock so they just kept collapsing. I had to do a makeshift repair to last the afternoon but it was a little disappointing to say the least.

It was a quiet and traffic-free run home early on Monday morning. I had to go to work in the afternoon so thankfully we didn’t get held up. Next on the agenda is our daughter’s wedding this coming weekend so it’ll be radio silence from me again until we head off to France for the school half-term – see you then! 🙂 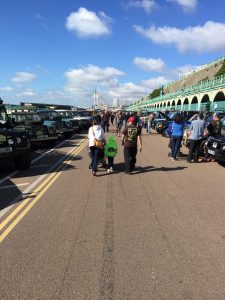 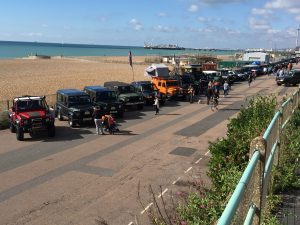