Haha! Do you remember those innocent days way back at the beginning of March when we were setting off on this adventure? What were we like..? Happily driving miles to the UK ferry port, full of excitement and anticipating all the nice people we’d meet, the places we’d see. Then we had the bombshell – the text cancelling our ferry. Hold that thought.

There we were, happily driving miles to the Spanish ferry port, full of excitement and anticipating telling family about all the nice people we met, the places we’ve seen. Then my phone buzzed. Really? Not again!! Yes, another cancellation – our ship, the Pont Aven, had technical problems and could we call Brittany Ferries? It could only happen to us…

We were offered the option of slogging back up through France to an alternative port, but to be honest – having done it the other way round in March and adding a week and 800 miles to our trip in the process, we really couldn’t face it. What else could they do for us?
“Well there is a bit of a backlog but we could get you an alternative sailing from Spain…”
“Y-e-e-e-s..?”
“…in a week’s time…”

So there it is. Condemned to spending another week in the sunshine, touring around, enjoying great food and drink, taking in the sights and topping up the tan. Oh, and getting 50% of our fare back. I shall be writing a strongly-worded letter of complaint, rest assured.

Now then, where have we been since our last set of despatches from Dénia? That’s an easy one – an enchanted city, a Roman settlement, a big city and our new favourite place in all of Spain.

The Ciudad Encantada – the enchanted city – is way up in the hills north-east of Cuenca. I learned a lot of geology there – mostly about a kind of rock called karst and how chemical reactions over the millennia erode the rock at different rates. The result is a set of weird and wonderful rock sculptures which you just can’t help interpreting as you go round. There were big ships, wandering bears, large busts (of wind-sculpted heads, I mean) – and your brain invents all kinds of animal shapes as you gaze at them. There were even tiny gnarled bonsai trees growing in cracks and crevices where seeds had drifted in but where few nutrients exist. We passed a rare chilly morning at the site after a spooky night when we were the only folks overnighting in the forest car park.

On our arrival we’d been tipped off to keep checking above our heads for falling creepy-crawlies. We could see lots of what looked like spiders’ webs in the trees, which we learned were hatching processionary caterpillars. So-called because they drop out of the trees and form a line, following each other to goodness-knows where. They have fine hairs which break off on contact and can cause severe irritation to human or canine skin – ouch!

As we were sprinting north to catch the ferry-that-wasn’t-there, we passed a single night at a camper-stop in Medinaceli. This former Roman encampment was at the top of a steep hill with views for miles around. I felt sorry for poor old Vince as we rounded the final corner – he’d had a whole day of twists, turns, climbs and drops as we made our way through yet more mountains on our way back.

The strangest thing about Medinaceli was that it seemed like a ghost town! It had the well-groomed feel of a tourist destination – neat streets, litter-free, artfully placed troughs of plants and immaculate buildings – but there wasn’t a soul to be seen. Perhaps they’d been warned and didn’t want our travelling misfortunes to rub off on them. We looked at the Roman Arch, the empty square, the empty bars and the empty restaurants and retired to an empty Vince for an early night. We love the English translations at some of our stopovers; this one warned us sternly that if we dared to get our picnic chairs & table out we would be severely punished by the mayor! I’d pay good money to watch that…

We hadn’t had a city break for a while so our next destination was Zaragoza. We found a campsite a little out of the city which had a great bus service with departures every ten minutes from a couple of streets away. Unlike our visit to Cartagena, this time we got off the bus at the right place. Actually even we couldn’t have got that one wrong as it was the terminus.

Zaragoza was a pleasure to wander on a sunny Sunday; now we’re further north the searing heat of the south has mellowed to a much more pleasant level so we weren’t dodging between patches of shade. What can I tell you? More churches, more cathedrals and another fine lunch! The highlight was the Aljafería Palace, a former fortified Moorish palace built in the second half of the 11th Century. It was badly damaged during the Peninsular War of 1807-1814 and allowed to remain in a state of disrepair until a full restoration took place in the last quarter of the 20th Century. Wikipedia can be so useful. We particularly liked the comparison between the faded but still visible ceiling paintings in some halls, and the magnificent and brightly coloured geometric patterns in the fully-restored rooms.

From the culture of Zaragoza we re-visited one of our stops from the outward journey – San Sebastián. It was on the way here that we learned about the ferry problem so we decided to stick around for three nights and get to know the place a little better. So much so that we now want to live here! San-Seb has pretty much everything you could ask for in a holiday town. It’s big enough to keep surprising you with streets and squares you haven’t seen before; it has a river with pretty bridges across it, it has a picture-postcard beach, a castle, a marina, and I haven’t even started on the food yet! For lunch here, they serve you a selection of pintxos – beautifully presented tapas-like nibbles with fish, meats, cheeses, olives and all sorts of unidentifiable goodies stacked on tiny squares of home-made toast or bread. With a glass or two of Vino Blanco, they’re a meal fit for a king. And while I’m on the subject you do need a King’s ransom to pay for them..!

Our highlight was yesterday afternoon when we cycled round the bay to catch the funicular railway up Monte Igueldo. The views there were breathtaking. I’ll leave you with one now while we plan out what to do with our bonus time here! 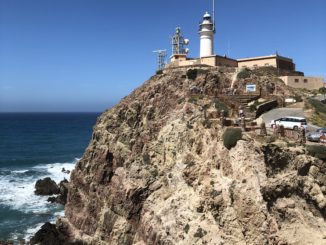 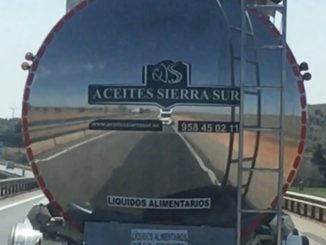 8 Comments on Déjà-vu All Over Again