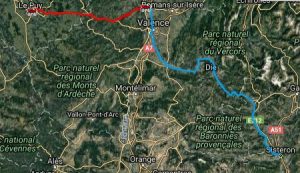 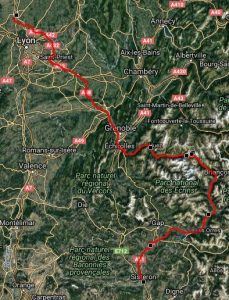 Once again, an email has flooded in from our biggest fan, a Mrs Trellis of North Wales. She writes, “I’m utterly fed up with all these little ones, which are neither use nor ornament. When are you going to give us the benefit of a big one?”

Well Mrs Trellis, this one’s for you – it’s a double portion. I hope this will be enough to satisfy you for now.

As I mentioned in my last post, all good things come to an end, and yesterday morning the group split into two. Three bikers heading for home, and three had one more day’s travel together before parting this morning to three different destinations. Gordon, Ken (the other Ken) and Pete had a night in Orléans and should be heading for Cherbourg now to catch the ferry. Dave, Paul and I biked further South to Sisteron in Provence.

It was a sad occasion in the underground car park in Le Puy-en-Velay as we said our goodbyes. I made the boys tuck their shirts in then wiped their noses, patted them on the head and sent them on their way. You just have to let go sometimes and give them their independence. Pete managed to get about three metres before falling off his bike before he’d even left the car park (really!) – we think it was due to the weight of all our beer money in his left pocket which he forgot to give back. Karma. Luckily neither he nor the bike suffered any damage. Well, except to Pete’s pride. That took a bruising and we haven’t even started with the jokes yet.

Paul, Dave and I plotted a course to Tournon-sur-Rhône, our first coffee stop an hour and a half away. I remember travelling this road last year in Vince and constantly wishing I had the bike with me. The surface is good, fast and full to bursting with biker-heaven bends. But. The weather wasn’t our friend and we found ourselves having to tiptoe round the corners in damp and slippery conditions. It doesn’t mean it wasn’t fun but we were all a little wistful at the Tournon coffee-stop, wishing the roads had been dry. We had a quick tootle down to the banks of the Rhône just to say we’d been. Little did we know what was to come.

The second half of the run was unbelievable, we had been warned to be fair; we weren’t far from a French town called Die. So all the signs said Die in 80km, then Die in 60 km, Die in 35km. It fair put the wind up I can tell you. If you can imagine lots of flash bulbs going off while somebody throws buckets of water at you and shouts in your ear while pushing you left and right you’ll get a fair idea of the thunderstorms we rode through. All you’d need to add is a fear of falling down a mountain and the maniacal giggles in your crash helmet for the full effect. It was wild, exhilarating and enormous fun. You don’t generally hear much in the helmet over the wind noise and the growl of the Triumph triple engine but those claps of thunder made us jump, I can tell you!

Our saving grace was a combination of modern tyres, self-preservation and Gore-Tex. The only wet bits when we got to Sisteron were feet & hands. The heated handlebar grips kept the cold at bay so we arrived relatively unscathed. We turned the heating full up in the rooms while we went to eat and left our boots & gloves gently steaming to themselves. And no, there’s no joke to follow about us returning to the rooms steaming gently ourselves – we were very restrained with the beers for once. We said our goodbyes to Paul before turning in as he had 500 riding miles to Germany to do today so he was starting at Oh God o’clock before Dave and I would surface.

We weren’t too late ourselves, hitting the breakfast buffet at 7.30am on a truly glorious morning. The storms had washed the sky clean and we were treated to the clearest of light, bouncing off the snowy peaks in the distance. At the first roundabout, Dave headed South with a wave as I turned North to start the three day ride home.

I must confess that riding solo after riding with a group is a bit of a relief. There are many benefits to riding together but there’s a welcome freedom found in going at your own pace, stopping and starting at will and there’s nobody to call you a prat for taking a wrong turn. Well apart from yourself of course. As you can see I took many opportunities to stop for a pic – the first one being the Captain Kirk’s-eye view from the cockpit of the road ahead. Look at that sunshine! The mountains!

Like yesterday the run turned out to be of two halves. In reverse order, the last half was horrible. I’m trying to avoid tolls for now to keep the cost down but Grenoble – and later on Lyon were just hot and bothered stop-start traffic. As in all built-up areas the nutter quotient was much higher with tailgaters, queue-jumpers and general idiots everywhere. I just kept my head down and tried to avoid the worst of them.

The first half of the day however was a superb riding experience. The first part of the journey took me through rolling vineyards. The season is just getting going; the mostly bare ancient vines are just black sticks standing in regiments like gnarled old soldiers. If you look at the map above there’s a bit of a bulge where I took a diversion into the Haute-Alpes. Higher and higher I went until I was above the snow-line on well-surfaced twisty roads. Each bend seemed to reveal a better view than the one before with jagged peaks and stony cliffs everywhere. I stopped for a breather in a layby to be greeted by a collie who came out of nowhere with a tennis ball in his mouth. Like the softie I am I spent 20 minutes in full bike kit playing fetch! 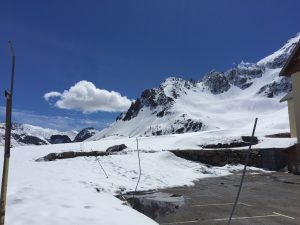 I’d hoped to ascend the Col du Galibier on this run. It’s a jaw-dropping series of hairpins to the summit with a tunnel cutting off the last few km for drivers who don’t have the bottle for the big drops over the side of the road. Crash barriers? What crash barriers! It wasn’t to be I’m afraid – the snow had closed the road so I had to settle for the Col de Lautaret as a slightly second-best. Gill and I stayed there last summer with Vince if you’d like to compare the summer weather to today’s pics. The place we stopped was under three feet of snow this afternoon!

Coming back down from the high altitude, the rocky landscape running with waterfalls of snow-melt gave way to green fields and fruit farms. The orchards were covered in white gauze to protect the trees from insects (I think). They looked for all the world like some Harry Potter spider had been at work overnight. Not one I’d like to meet, that’s for sure.

The only bottom-clenching moment of the day came at the Barrage du Chambon – a hydro-electric dam which is undergoing major refurbishment and strengthening. The main road round the reservoir is closed and a temporary (very temporary!) road has been laid round the steeper, less accessible side. How they did it, I have no idea. It looks in places like something from WW2 with pontoons and spindly girders holding the road up with a steep wooded slope to the left and eek! a huge drop to the icy waters below. Trucks and camper vans are banned, and to be honest I had to breathe in a few times to allow cars going the other way to pass. There were several sections where even that wasn’t possible so they resorted to single alternate lane traffic lights. Scary stuff.

Tomorrow should be a lot tamer – unfortunately. As I travel North I’m going to have to resign myself to a bit of motorway travel. I’m still many miles from Calais with the Dover to the Midlands leg to cover too so it’ll be cruise control set, music on and wake me up when we get there please. I’m heading for Metz, about 270 mostly boring miles away so I’ll start early (maybe!) and hopefully have a bit of exploring time when I get there. 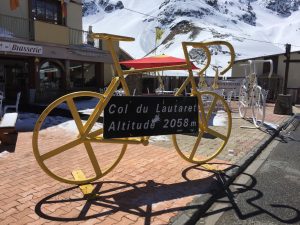 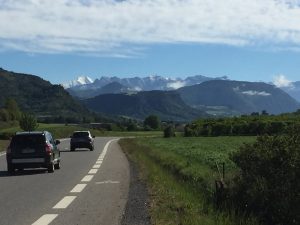 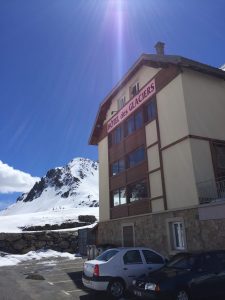 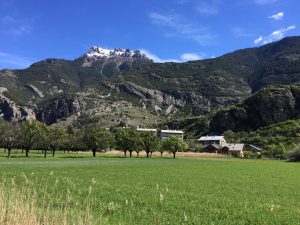 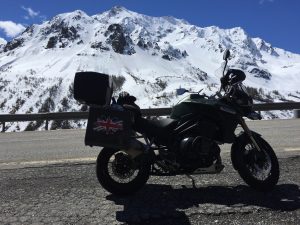