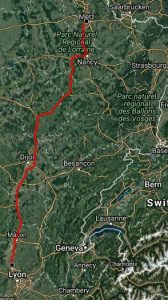 By contrast with yesterday’s epic, there’s not much to say about a boring day on the motorway. What do you mean, that’s a relief? Pipe down at the back there.

I had the usual cereal-croissant-tea-baguette breakfast at the hotel and headed off for fuel as the Green Machine was running on fresh air. I decided to have an A road tootle, before giving in to the need for motorway miles.

As I was already by the Saône river, I decided to follow it North to Mâcon, a wine producing town about forty-five minutes away. I’m afraid it wasn’t a very picturesque journey – just roundabout after roundabout with very little to see. Mâcon is a lovely town, as we found last year so it was pleasant to see it again, albeit for only half an hour. I couldn’t put it off any longer so I headed for the motorway and the long slog to Metz.

On the motorway, all the advantages of the bike – awesome acceleration, narrow profile, cool rider – disappear You’re moving at the same speed as the rest of the traffic, being buffeted around in their wind blast, and without the comfort of a heater or aircon, (or a bed, in Vince’s case) a media player or even any legroom for a stretch.

That’s not strictly true; our helmet Bluetooth thingies allow us to play music or a podcast from a phone in your pocket but it has to be pretty loud and that can get tiring. So what do we do to stay awake? Well! There’s a wealth of activity if you’re determined.

There’s maths – how many miles in 325km? Well, you divide by 8, that’s er…, and then multiply by 5 to get um… so it really helps your mental arithmetic. There’s the trip computer to play with so you can look at real-time and average speed or fuel consumption. I sometimes play guessing games like can you guess which pannier the pants are in? You can ride with one buttock on the seat, and swap to the other – I know! The opportunities for amusement are endless. That’s without mentioning bike aerobics where you can do stretching exercises as you go; ankle rotations and knee flexes. If all else fails you can wink suggestively at the laydees as you pass their cars – but make sure you don’t meet their partners at the next services #awkward

You’re not convinced are you? Nope, you’re right – it’s soul-destroyingly boring and I have 500 more miles of it tomorrow *cries*

I didn’t take a single photo all day as motorway bridges are not my thing and I might have dropped the camera at 90, ahem… 70mph. So with you in mind, instead of heading to the bar and having an early night, I walked the mile and a half into the city of Metz to show you the sights. 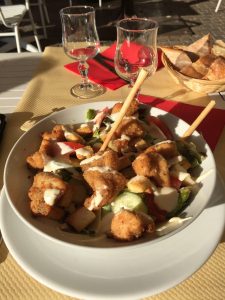 On the walk I went through some of the more run-down parts of the town, eliciting stony stares from the groups of young men standing around outside the fast-food joints. Not for the first time this trip I kept my head down and walked on. I emerged into food heaven as I neared the centre with Japanese, Thai, Indian, Greek & Pakistani restaurants lining the streets. It would have been rude not to partake but with my delicate tummy and a long ride tomorrow, discretion ordered a large Caesar Salad for me.

I then spent a happy hour wandering around looking at the sandstone of the bridges and the medieval churches glowing in the setting sun. I hope they tempt you to visit some day; I’ve been here twice now. I always saw Metz as just a sign on the motorway on my way to more interesting places but it’s so much more. I’ll be back. Arnie.

I’ll close for now. As it’s going to be such a long day heading home tomorrow, I’ll leave it a day or two before posting again; just a quick summary of places visited, miles travelled and so on. It’s been fun having you along – you’re so much more interesting than those boring motorhome readers, I can tell you. Thanks for your company, and who knows – we might do it again if I survive the rolling pin; I told Gill I was only popping out for a loaf… 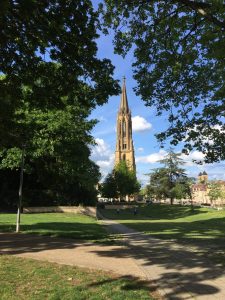 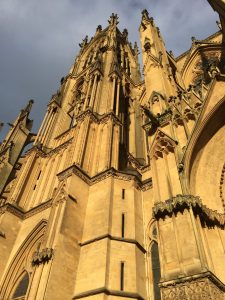 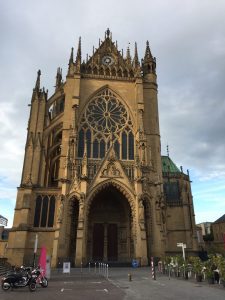 2 Comments on Haven’t We Metz Somewhere Before?