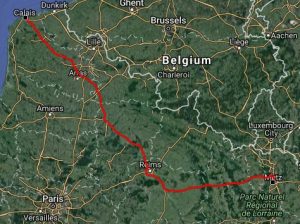 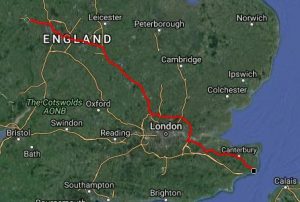 Home at last! In my absence the English Spring seems to have turned into the English Summer. I can tell because the rain seems ever-so-slightly warmer.

The feeling has just begun to return to my fingers and toes after a gruelling 540 mile, 12 hour run home. Don’t believe those numbers above – I did those before we left and they don’t take into account diversions, wrong turns or just deciding to explore that road a bit in a different direction.

I didn’t leave as early as I’d have liked; too much faffing packing up as usual meant I didn’t leave Metz until 9.45am or so. Not a disaster but it meant keeping the stops short and the speed er…consistent. It didn’t help when I kept going wrong in the complicated Metz interchanges. In fact I made exactly the same mistakes I made in Vince last year – just a bit faster. Three times round the ring road – again. At least I’m consistent.

There’s not too much to say about the long motorway drag to Calais other than most of the games mentioned in the last post were played, and many more. I have to say though, that the French Autoroutes are superb even if it cost £35 in tolls. They’re in tip top condition, no congestion to speak of and there are only rare roadworks. I passed three service trucks checking the barriers; the rear one in lane three had flashing arrows to warn you to go round the two working trucks – which everybody did without issue. In the UK two lanes would be coned off for three days without a worker in sight to the frustration and anger of the queues of drivers. They may be French but they get a lot of things right.

On arrival at the port I parked up beside a coach waiting to board. Then I looked behind and there were nine – count them – nine more coaches full of French schoolkids off on a trip to the UK. Just think about that for a second, 450 excited shouting, screaming, phone-wielding, crisp-eating, drink-spilling kids. And did I mention the shouting? It was my own private hell for the next two hours. There was no point trying to get a cuppa or a sandwich as the queues stretched right round the ship. During my first night home Gill said I woke screaming ‘Make it stop! Make them go away!’ at least twice; I don’t remember that at all.

Riding back from Dover on full-fat data again I managed to stream BBC Radio 4 to my helmet so I learned loads about elephants in Sri Lanka, and even more about the use of Lithium in science. Did you know that Samsung phones explode because crystals called dendrites grow on the battery terminals causing short-circuits? Me neither. Or that a Lithium battery is 30 times less dense than its lead-acid equivalent? Apparently it’s used as a medication for certain mental illnesses too. Lithium that is, not lead-acid. Best of all – and you heard it here first – in five years time your smartphone battery will be made of Lithium impregnated glass so no more exploding Samsungs. And on that bombshell… Sorry.

So what are the final stats? Well each of us will have a different story to tell but the Green Machine did a total of 2,264 miles in ten days with one day off. So that would be nine, then. As my bum can attest I was sat on board for 48 hours and 4 minutes. We did 49.9 miles to the gallon overall which isn’t bad for a high-revving 1200cc engine. And if you’re reading this officer, my average speed was 55.2mph. It’s normally lower on a leisurely bike trip but I had three big motorway days at the end as well as one at the beginning of the trip which lifted the average.

So that’s it. I’m unlikely to do any more big biking trips this year; I shall jealously look at Paul and Dave’s Facebook pages in a few weeks as they wander up to Finland for a bike festival. Somehow our monthly Sunday breakfast runs don’t seem quite so inviting but I’m sure they’ll be fun just the same.

Here’s a few out-takes from the trip to keep you going until we get Vince packed up once more and head for pastures new. Meanwhile we have a whole house full of belongings to pack and ship to who-knows-where.

2 Comments on Mis-takes and Out-takes