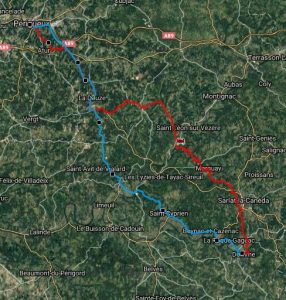 In future we’ll make our arrangements for the morning before we start drinking in the evening. That way we’ll avoid a repeat of this morning when 3 of us arrived in reception fully kitted up and ready to roll, and the other three arrived in civvies ready to go out and find breakfast!

So three grumpy bikers went off to get their kit on and we headed off for a day’s easy rideout.

We’d had such a huge meal last night that we really didn’t need a big breakfast but after 45 mins or so on the road we pulled in at a little café-restaurant. The nice lady set us up with six petit-déjeuners consisting of orange juice, fresh crusty bread, lots of croissants, coffee and er… a selection of cheeses. After that lot we decided we’d better skip lunch.

We’re in the heart of the Dordogne region now, and the landscape is very English with rolling fields and wooded valleys with the addition of rocky limestone cliffs making regular appearances. This part of France has been inhabited since prehistoric times which is what lured us to the Troglodyte Village in La Roque St. Christophe.

Here we found remains of habitation high up on a cliff face. About a kilometre of excavations along the cliff showed holes where roof beams were supported, shelves where possessions were stored, and in more recent times a full working forge and abattoir existed to support the thousand or so inhabitants. It is easy to see why earlier civilisations made this rock face their home as it is easily defended and was quite self-sufficient with tradesmen and livestock all in place.

The weather has dramatically improved – we were all hot and thirsty by the end of the visit so before boarding the bikes we stayed on for a cool drink at the café and complained bitterly about the high temperatures in true British style.

The next stop was a hilltop bastide village – Domme – where the plan was to explore the cave complex below the town’s main square. As it turned out, given the hot day and the miles covered, we just sat outside with another cool drink and chatted the afternoon away. Well we are on holiday after all.

The road back to Périgueux was a cracker. All smooth surfaces and fast sweeping bends made in biker heaven. We took full advantage and indulged in some formation flying – only to be attempted with bikers you know and trust. We rode fairly close together, fairly er… enthusiastically, the advantage being that a row of slower cars can be demolished very efficiently by using huge acceleration, all at the same time. You have to really trust the man in front to go as soon the opportunity arises because you’re already accelerating at warp factor nine. Huge fun. All without breaking the speed limit of course. Officer.

After a shower and a change we assembled for pre-dinner drinks at the Irish bar near the hotel then awarded top marks to Paul for booking a table at the only Indian restaurant in this part of France. On previous trips we’ve sometimes had a falling-out or two. We’re all fat baldy middle-aged opinionated men after all, but this year (so far!) the chemistry has been great – we’ve had so many laughs, particularly at Ken (the other Ken, I told you it was confusing) standing in the pub to give us a word-perfect rendition of Ernie, who drove the fastest milk-cart in the west. Ken’s mum Maureen is a keen follower of the blog so I expect she’ll have a word or two for him when he gets back. Things possibly went a bit too far this evening back at the hotel when the three of us who took the lift, held the door to the stairs shut so the other three couldn’t open it. Not that the problem was obvious at all with us giggling like schoolgirls on the other side. We really need to grow up. Just not too soon.

Tomorrow’s arrangements were made while we were sober this time so it’ll be breakfast on the road again (we ain’t paying €16 for no hotel breakfast, no sir) on our way to tomorrow night’s destination, Millau.

See you when we get there 🙂 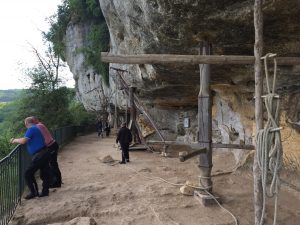 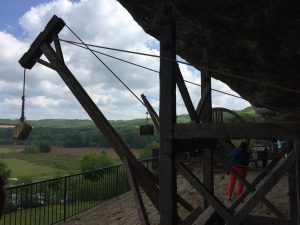 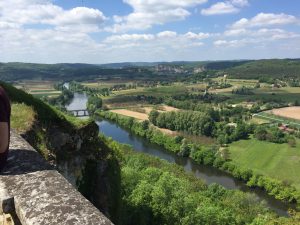 3 Comments on One Domme Thing After Another