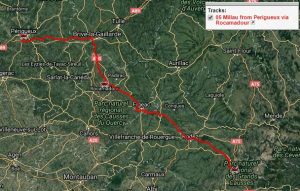 I have to confess I wasn’t the most popular camper yesterday morning. We’d agreed to to leave at 9.30 but unfortunately I arrived in the car park at a tardy 9.50 to find a group of stony-faced bikers all kitted up with engines running & ready to go. Have you ever tried to load up a bike and get your gloves and helmet on with 5 daggers in your back? It really wasn’t nice! My excuse was that I had to completely reset and re-connect my helmet Bluetooth thingy so that I could hear the satnav again. The previous day it was silent and it’s quite tricky trying to ride the bike and watch the screen as well. The guys would soon be complaining if I took them the wrong way. Oh, hang on…

The day could have gone even further downhill as my satnav got us on the way but put us on a motorway with the instruction “Next turn-off in 86km” What?? We didn’t come all this way to sit on a motorway. A quick fiddle with the settings had us off at the next junction and on to some more biker-friendly twisty roads.

As we were in a more rural area, it was a bit tricky finding a breakfast stop but eventually we pulled over in a village at a little café attached to a general store. It was getting a bit late for breakfast to be fair so we weren’t too surprised when the owner said he didn’t have much in the way of food. We were reaching for a loaf off the shelf when he said that he did have some of yesterday’s pain au raisins and pain au chocolat if we didn’t mind that? We didn’t. So orange juice & coffees were served and we all tucked in.

Our next stop was at Rocamadour, an amazing place built into a steep slope with a church at the top. We stopped just before the town to admire the views and rehydrate with a few cokes and, oh yeah – more chips. The heathen crowd I’m with couldn’t face the thought of climbing lots of steps in the medieval heart of the village so they chose to look from afar and move on. Philistines. If you’d like to know more about what’s there have a read of my post from last year when Vince, Gill and I went there.

I had a break from leading the next session – Pete did a great job leading us straight into a dead end. I felt his pain but we try not to complain about the odd wrong turn as we’ve all done it and it’s quite a responsibility both finding the way and keeping the group together.

We arrived in Millau after enjoying views of the world famous viaduct from some excellent roads. Smooth and twisty! Our hotel was pretty basic so we bought beers & nibbles from the local supermarket to enjoy in the sun before showers and an evening meal. The meal itself was a fiasco with a combination of mains arriving during starters, some mains not arriving at all & when they did they were cremated. We made our dissatisfaction known – in a polite British way of course…to find we hadn’t been billed for it when we left this morning. Result!

Just in case breakfast was going to be a similar standard we chose to head to the supermarket again instead and had a lovely meal of croissants, yogurt, bread ham & cheese. It probably wasn’t very subtle to eat it at a table in front of the restaurant window though…

Today’s run is to Le Puy-en-Velay via the hairpin loaded Tarn Gorge, after we take some moody shots of the bikes under the famous viaduct. We didn’t take too many photos yesterday but we’ll make up for it today, I promise.

See you on the other side! 🙂

2 Comments on A Bridge Too Far