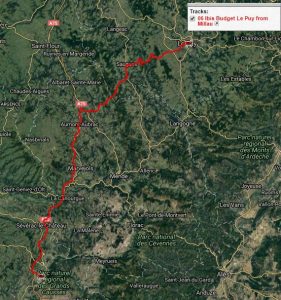 After our supermarket brekkie, we headed off into town to find a good vantage point for pics. We did find a bridge beside a motorcycle shop where the views of the Millau Viaduct were superb. Sadly it was too busy to line the bikes up for a photo opportunity. Instead we rode out of town to find somewhere quieter. On a country lane we found a deserted layby practically under the viaduct which suited our purpose. The results are below.

Today is more of a pictorial blog as most of our time was spent riding the spectacular roads of the Tarn Gorge. Sometimes we were high above the river on the edge of the gorge, then we’d swoop back down to the river via a dizzying series of hairpins, only to start climbing again through arches cut into the limestone. The more childish of us made a point of needlessly revving the engines in the tunnels “because it sounds so good”. What was it I said yesterday about growing up? Not likely!

It was an excellent, though chilly ride, which terminated in the busy streets of Le Puy-en-Velay. I have mixed memories of this town, on the one hand we loved the warm weather and the Bastille Day fireworks with Vince last July, but then news came through of the terrorist atrocity in Nice with such a tragic loss of life. Our thoughts at the time are here and here. We rode straight into the underground garage of the hotel (yes the engines sounded good there too!) and we’re parked up for two nights.

A few doors down from the hotel we found a little bar/restaurant being run by a very friendly (as in she tolerated my appalling French) lady. When we asked for a menu we were told it’s €15 and you’ll take what you’re given. Fair enough. So we had a plate of cold cuts as a starter, the tenderest slow-cooked pork casserole you could imagine, with Puy lentils and pasta, followed by a smooth chocolate mousse, a cheese platter and coffees.  So far it was the best meal deal of the trip.

I was all for an early night but I was dragged against my will to yet another Irish bar (Pete can only drink Guinness) where I may have had several beers and possibly a whisky. Tbh I can’t remember. Just as I was getting into my swing the lightweights I’m away with decided to call it a night. That said, they’ll probably feel better than I will in the morning…

Tomorrow is a rest day, which will allow us to explore the medieval quarter of Le Puy. More info next time – meanwhile it’s two paracetamol and lots of water for me – see you in the morning. 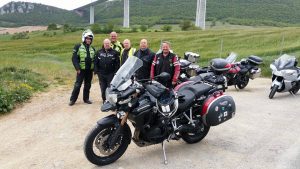 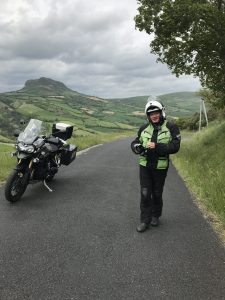 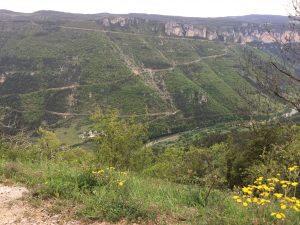 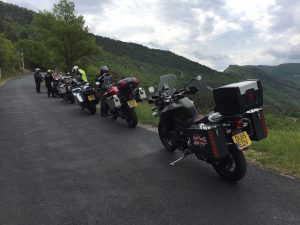