After our chat yesterday the rain eventually cleared up a bit, so waterproofs on and brollies in hand we took a short-cut across two muddy fields to the main road into Ellesmere.

The town was a little quiet for a Saturday afternoon; we suspected that everyone was at the local craft fair in the village hall. We’d seen the signs hammered into the side of the road but elected not to go – after all, how many Yankee Candles and knitted tea-cosies does a person need? We have too many already… 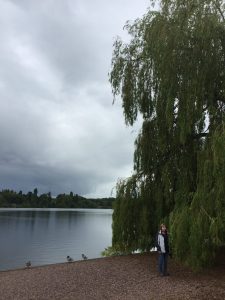 Our walk took us a mile and a half or so to the Mere, a pretty lake landscaped on one side along the road, but left wild on the other. A nice combination. To boost our flagging energy we stopped for lunch at the Boathouse Bistro by the lake, a busy eatery but with quick and polite service. I opted for a giant Chicken Caesar while Gill chose the fish and chips. She was careful to order a laydees’ portion in case I accused her of emulating our French biker feast last week. Full to the brim we walked off the lovely meal by exploring more of the Mere’s banks and the Ellesmere Sculpture Trail.

The Trail was a walk through the Castle Fields opposite the lake where boulders deposited during the last ice-age have been carved by internationally acclaimed sculptors (it says on my leaflet). The first one we saw had us raising an eyebrow and saying the Council must have had the wool pulled over their eyes by the Portuguese sculptor. It consisted of three rocks decreasing in size alongside each other. Very er…artistic.

Further along the way were more interesting installations which you can see in the pics below. I must be some kind of Philistine because frankly they just looked like rocks with chains round them, or holes in them! Actually, on reflection, the one with the chains did make me think about my mortgage. Perhaps it should have been titled Millstone.

As the weather was closing in again we headed back to Vince via the canal for aperitifs, Celebrity Pointless and five minutes ear scratching with the likkle lamb which was wandering around the site. It was so cute, bleating as it saw us coming and putting its front paws (hoofs? Hooves?) up on the first bar of the fence. I didn’t take any photos as I knew they’d make me feel hungry later…

With our evening meal we watched the one non-Star Trek DVD from the campsite library – a Bruce Willis shoot-bang-fire fest. I can’t remember the title but does it really matter? Only the amount of hair he has left is different in each film anyway.

This morning was like old times on our big trip last year. Me doing the outside stuff; draining tanks, emptying unmentionables, unhooking the electricity, and Gill doing a quick hoover on the campsite’s electric, stowing things away and checking I’d retracted the TV aerial. I’ve forgotten before and it makes Vince look a bit daft driving along with a big extended pole on his head.

We decided not to stay too late as we had some interesting news yesterday which means we have plans to make when we get home. The neglected and unoccupied house in South-West Scotland we’ve had our eye on for months, is finally going on the market next week. Our spies have done very well! We need to get in touch with the agents and get ourselves up there for a look inside – assuming the price is manageable of course. We’ll make a trip of it and look at a few more places to be sure this is what we want. Sadly it’s not really practical to go house-hunting in Vince, he’d take ages to get us there and he’s not exactly parking-friendly so we’ll take the car and B&B it. He knows we’ll be thinking of him.

We’ll give you a full update next time we’re away in the big fella – which hopefully won’t be too long.

Thanks for coming this weekend, and take care 🙂 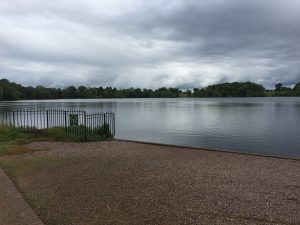 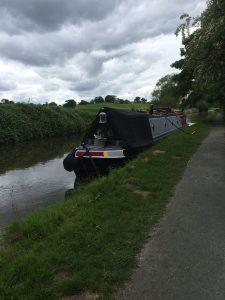 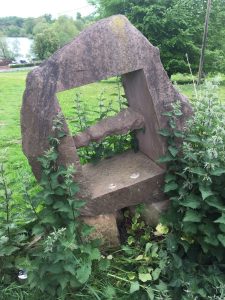