The door creaks open slowly. A waft of stale air escapes; a fleeting scent of warmer climes, sunshine and barbecues, the sound of laughter. Then reality bites as the door swings wide. An empty TV bracket, cables dangling. A bare mattress, cupboard doors swinging open, a bathroom free of any personalisation – no lotions, no potions.

Five months. Five whole months since our return from Spain that poor old Vince had been sitting on our drive unused. Not only unused, but unwashed in all that time. His tyres were looking sad and deflated, his gutters filled with leaves and it fills me with shame to say that his paintwork… well his paintwork was looking decidedly green with that horrible algae growth that only neglected motorhomes and caravans seem to acquire.

You might have been thinking (how could you?) that we’ve been off travelling all these weeks without taking you along, but no! We’ve been stuck in the rut of house renovation and summer seasonal work so an abandoned and sickly-looking Vince is the price we paid.

A whole weekend of scrubbing and polishing, topping up pumping up and filling up eventually had him looking handsome again; I’m sure I caught him winking at a passing Tesco van this morning so his self-confidence is clearly back to normal. Fortunately his solar panel has quietly been keeping his batteries topped up so his engine started first time.

We weren’t off on a three-month European trek this time. It was more of a three day, just-up-the-road jaunt to the caravan park where I work part-time over the summer. The owners kindly let us park up there sometimes if the site isn’t too busy. I can roll out of bed, open the door and I’m already at work – brilliant!

So what’s been happening these last few months? Mostly graft unfortunately – ripping out fireplaces, insulating under floors, painting – endlessly painting – woodwork, replacing bathrooms, carpets and even furniture. We used Gumtree to sell our old woodburner and every stick of lounge furniture for a fresh start. It all went in a couple of days – just before the call from the furniture warehouse to say there was a delay on the new stuff eek! So now we just have an old sofa and Vince’s picnic table in our lounge – for five more weeks! It’s all part of the fun of downsizing and moving 300 miles north so that we could retire early and er… do more travelling. That worked out well then.

We’ve managed a few non-Vince breaks over the summer, including a cottage break with the extended family to spend some time with my shiny new granddaughter who was born in June. Since our own children grew up I’ve had zero interest in other people’s babies, but I could bore you for hours talking about and sharing pictures of our beautiful Rosa. And I probably will! I even managed a biker-break with the idiots you met some time ago. We had a weekend break in Le Havre drinking beer, visiting the Normandy beaches and drinking more beer. I say ‘weekend break’ but now that I live in the frozen north I have an extra day’s travel either end of the trip just to meet up with the chaps.

Earlier in the year we did have a vague hankering to take Vince down to the sunshine for a few weeks in November and December but the caravan park where I work is having five new lodges built over the winter. How could I resist the offer to drive big boys’ toys for a few weeks? Apparently my 9-tonne dumper truck arrived today. My employers aren’t daft though – they waited until I’d signed on the dotted line before telling me we start at 7.30am every day to make the best use of the light…

In early 2020 we’ll continue the renovations but we’ll take you on a little explore around Scotland now and then so Vince doesn’t get out of condition again. He says he’s just big boned but he really needs the exercise to keep in trim. We have our younger daughter’s wedding in July and another summer season at the caravan park to contend with but there’s a big red circle round September 2020 on the calendar. That’s when we plan to do the next Big Trip of around three months or so. We can’t wait to take you along on that one but we hope you’ll bear with us in the meantime. Just because we’re not blogging or travelling as much, it doesn’t mean we’re not missing you 😉 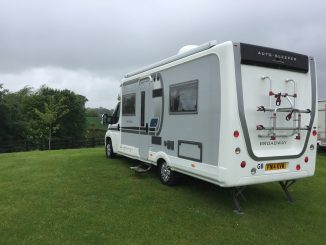 A Mere Weekend Away 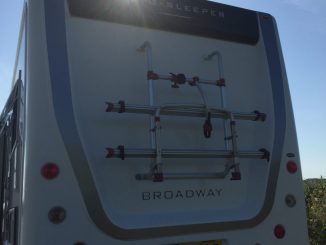 A Tale of Two Ports