Well fortunately we weren’t robbed in our sleep after last night’s wild camping, however we did suffer a very rude awakening as we hadn’t realised we were running out of gas. Vince has the luxury of a central heating and hot water timer so we set it to go on half an hour before we get up so we’re nice and toasty. I know… we’re really slumming it. This morning however, after the heating had been on for a while about a thousand flashing warning lights and alarms went off. We jumped up and ran around like headless chickens until we realised the gas had finally run out. This meant no heating, no hot water, no fridge and worst of all NO TEA!

I may have mentioned Vince’s suspect gauges before. If I haven’t, well, since we left the UK the outside temperature has ranged from 48-52 degrees, phew! Our waste water tank alarm keeps telling us it’s full. When we’ve just emptied it. And apparently the engine battery died weeks ago yet somehow it starts up fine every day. So the gas problem was an easy mistake to make; last time the gauge said empty, we tried to fill up and only squeezed six litres into a twenty litre tank. This time we thought we wouldn’t trust it and hey presto, no tea! When we finally found a garage which stocked LPG it took nearly nineteen litres, sigh… We love Vince dearly but we don’t believe a bloomin’ word he says. It looks like the only option to avoid running out of gas is to top up every week or so.

As we were on the road anyway we stopped off for a wander in Huelgoat. We stayed in this town four years ago when we came over in the car. Somehow last time we missed a visit to the Devil’s Cave, a hollow under a pile of huge boulders which has a river flowing through it. We rectified that error, then went in search of bread for lunch. At the Boulangerie I seriously embarrassed Gill by helping myself to what I thought were free samples of hazelnut chocolates on the counter. Well how was I to know they were simply on display there? Luckily the assistant either didn’t see me or thought that’s how les stupid Anglais behave. They were bloomin’ delicious anyway!

After Huelgoat we had a lovely run north along uppy-downy twisty woodland roads, which brought us to Plougasnou. We found we could stay for free on a little jetty in this pretty fishing town where the views are amazing. We want to make Vince look as wide as possible in these very narrow bays otherwise we won’t be able to open the door if anyone parks either side of us. This part of North Brittany is known as the Côte de Granit Rose – the Pink Granite Coast – and the rocks are striking in their colour. We spent some time this afternoon outside the shelter of the harbour watching the breakers smash against the rocks.

The sun is just over the yardarm so the drinks are poured. Time to relax in the front seats and enjoy the sunset. There’ll be no more running out of gas this day… cheers! 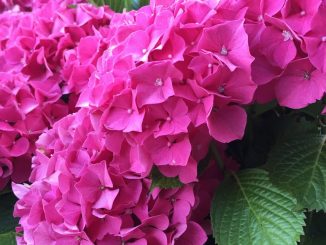 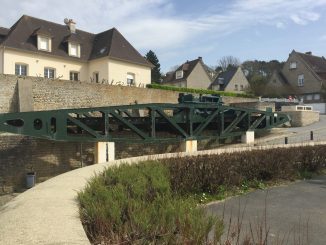 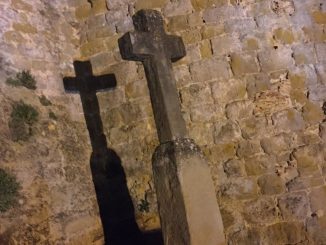