We left you last time on the shore of the Béznar Reservoir, a gem of a stop only minutes from the A44 – the North-South motorway between Granada and the coast. There’s just a large pull-in area with trees placed about a Vince-width apart, right on the shore. There are no signs to say it’s a motorhome stop, but then again there are no signs saying it isn’t, so we spent a very peaceful night in the company of two or three other vans. The next morning we were feeling pretty energetic after such a good kip, so we walked across the dam, down into the gorge and up the other side. “Up” being the key word in that sentence. Trust me, we weren’t feeling quite so energetic after a couple of miles climbing the zig-zagging path back to the dam and a cool drink from Vince’s fridge!

We’re on a bit of a mission now to squeeeeze the last drops out of our remaining time in this beautiful country so we’re doing slightly longer drives between destinations. Once we’d recovered from our morning exertions we closed the hatches, tied down any loose objects and fired up the big fella for a run back to the coast to the Cabo de Gata National Park.

Our satnav sent us in an unexpected direction; turning us off the motorway on to a twisty road which ran under the elegant viaducts supporting the A44. The scenery was lovely – all lakes and sweeping bends, until we began to climb. And climb. And climb some more. We pulled over at the top of one particular pass to check the maps. Actually it was to let Vince cool down – he was doing his best but we’d filled up that morning. The poor fella had a full tank of diesel, a full tank of fresh water, a full tank of LPG, and he probably had his fill of us sending him up such ridiculous roads! We just pretended to check the maps to spare his feelings.

Then I did that really annoying chin-stroking thing men do, “Ah, I think I see what’s happened here…” Cue Gill rolling her eyes as I mansplained what she’d realised ten miles earlier; that we were set to ‘no tolls’ and ‘fastest time’ on the satnav so it had decided to send us through the Alpujarra Mountains which form the southern flank of the Sierra Nevada. Ah well, in for a penny… The next couple of hours were a spectacular roller-coaster of a drive along narrow roads, hairpin bends with stomach clenching drops on the other side of barriers which looked to be made of matchsticks. It was brilliant! And I can’t wait to bring the motorbike over to Spain and do it all again.

Just beyond the town of Cabo de Gata we spotted a car park right by the sea which held four or five camper vans so Vince elbowed his way in between a couple and that’s where we stayed for the night. Our guide book mentioned how windy this part of the coast is and it wasn’t joking! We could hear the waves crashing on the beach all night just metres from Vince’s bumper. When we opened the blinds we thought it was a foggy day until I tried the wipers, to find we were covered in salt spray. The wind had dropped and we could see that the main road up to the Cabo de Gata lighthouse was shaded by the hills behind us, so I jogged off for a bit of healthy exercise, and to check out the views; well I have been enjoying the beer here. And the cheese. And the bread.

I needn’t have bothered really as the route to our next stop took us right past the bloomin’ lighthouse anyway. We stopped to enjoy the views a second time – but this time with a camera for your enjoyment.

We were on our way to last night’s stop – a double-header at Mojácar. I say double-header because the Mojácar Playa part of the town is on the beachfront, and the older part – Mojácar Pueblo – is a couple of kilometres straight up. Did I mention that this part of Spain is very hilly..? Our guidebook describes Mojácar Pueblo as a jumble of white cubist buildings cascading down the hill. They date from the sixties when the local mayor – distraught at all the locals abandoning the town for the money-making Costas – offered the land to locals for free, as long as they guaranteed to build on it within a year.

Our day worked out very well for a change. We arrived at a beach-side pull-in place recommended by our park4night app but weren’t too happy that there were no other vans there. This can mean that it’s either not very secure, or that the police are moving campers on which sometimes happens if locals have complained, or if the site gets too popular. Gill spotted the sunshades of a restaurant a little further up the road, so we stopped by for a fishy lunch. Chatting with the waitress, she said it would be fine if we pulled round the back out of sight of the road, and that we were welcome to stay overnight. We were pretty much on the beach, and the sea-bass was very tasty too. Result!

Remembering our tiny streets adventures in Zahara, the last little village we visited, we were careful not to stray into the centre of Mojácar Pueblo when we took Vince up there this morning. Even so, the “ring road” round the town was one-way and barely passable in a motorhome due to the ‘interestingly’ parked Spanish cars. In fact the Spanish word for parking, can also be translated as abandoning, isn’t that interesting?*

We abandoned Vince in a coach park in the lower part of the village and took the handy lift up to the touristy part. It was beautiful. Immaculate white buildings, narrow streets, random staircases from one café filled terrace to another. We had an enjoyable hour or so wandering the tourist tat, sorry – artisan shops and drinking coffee, stopping every now and then to enjoy the views from the highest point in the whole area.

Continuing our grand leaps along the coast, we’ve just arrived at a handy little motorhome stop in Cartagena. It has pretty much all the facilities of a campsite – fresh water, waste water dumping, showers, loos and a laundry, but without campsite prices. €12 a night to you guv’ and I’ll throw in the electricity as well. Great value! The plan is to catch the bus in the morning into the old town of Cartagena which we’ve been told is a treasure trove of Roman history, with some good eateries thrown in for good measure. We’ll tell all in our next update. Have a great weekend all 🙂 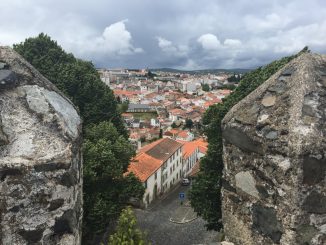 2 Comments on I’ve Been Driving in Mojácar