I seem to be making a habit of starting these posts with a weather report. Last time it was a deserted, rainy and muddy campsite in Toledo. This time we’re recovering from the shock of foot-deep snow as we twisted and turned up the Puerto de Navacerrada in the mountains. More of which below.

Back to Toledo then, and fortunately the rain had dried up by morning. The city hadn’t figured in our original plan (what plan? Gill just said…) But our usual sketchy research revealed it was roughly on our way north for the ferry so we found Camping el Greco on the outskirts and booked in for a couple of nights. As I mentioned last time it was practically deserted but we were just grateful that they’re open all year. Parking in unofficial spots is fine if you’re in a rural location but for city stops we like to know we can leave Vince for the day without worrying about security.

Our first sight of the old walled city was across the River Tagus. (We have fond memories of cocktails at sunset by the Tagus in Lisbon). And what a sight! Rocky slopes rising to the battlements and turrets, covered with trees in autumn colours, and dominated on this side by the imposing Monasterio de San Juan de los Reyes. When we actually visited this former monastery in the winding streets of the city, we spotted that all around it was decorated with iron manacles and shackles. These had been incorporated into the design of the building as a result of Queen’s Isabel’s order of 1494, to celebrate the release of Christian prisoners from Granada who had been held by the Moors and were released during the Reconquista. It sends a shiver down the spine to think that these were the actual shackles worn by actual people all those years ago.

At first we didn’t realise the significance of our campsite’s name. We soon twigged that every business in Toledo seems to capitalise on its most famous former resident – the artist El Greco. His real name was Domḗnikos Theotokópoulos so it’s not surprising that most people called him The Greek! We managed to find the museum dedicated to his works so we went in for an explore.

At first we thought we were wandering around his former house until we started reading the little starred notes on the notice-boards. It’s like when you buy a cake with a ‘chocolate-flavoured’ covering. Not quite the real thing. It is supposed to ‘re-create’ the home of the artist which no longer exists. That said, it was a 16th century house, beautifully restored, so who knows? Maybe he did pop in from time to time. What wasn’t fakery and deception (as far as we could tell!) were his paintings exhibited all around the museum along with works completed by his followers and apprentices.

The main attraction is a series of 13 paintings portraying Christ and his disciples originally produced between 1610 and 1614. The series has Christ looking directly out of the picture, with six disciples looking left and six to the right. The disciples represent his 12 original followers, except that Saint Paul replaces the disgraced Judas Iscariot . That description was lifted direct from Wikipedia I’m afraid, but you can see the paintings for yourself on this page. Seeing them lit up in the silent darkened gallery was another shiver down the spine moment.

After our little bit of culture we stopped off in a side street for lunch. We’d spotted a noisy café which offered a good value dish of the day and which was full of locals. This time lunch consisted of a garlicky soup with slices of bread and a poached egg floating in it. The main course was a chunky venison stew, bread, wine and a dessert all thrown in with the price.

I have to be honest – we nearly re-visited our lunch later in the afternoon when we stopped off at a gruesome exhibition of Antiguos Instrumentos de Tortura. Yes that’s an easy one to translate – ancient torture instruments. That there Spanish Inquisition certainly knew many creative and imaginative ways to get information and confessions from heretics back in the thirteenth century. There were examples of early iron maidens. These were coffin-shaped cupboards with strategically placed spikes placed to make it rather uncomfortable when the doors were closed. Simple but effective thumb screws were laid out alongside many pointy, sharp (or both) objects for inserting anywhere the torturer felt would get the best response. To be fair, if they wanted my confession they’d just have to wave it in front of my face. When I came out of the faint, I’d tell them anything they wanted!

Having put Toledo on our ‘must visit for longer in the future’ list we headed off again towards Valladolid, the next major city on our route back for the ferry. I’ll save Valladolid for the next post but on the way we had one of those moments. We’ve had them before on these trips, when you get into an exit lane by mistake on the motorway and whizz off in the wrong direction.

Our satnav usually recalculates and brings us back on a bit further up… and sometimes it doesn’t. This was one of those occasions. We went up, and up, along the Navacerrada Pass through a heavily forested national park in the Guadarrama Mountains. It rained, then snowed, then got foggy, then snowed some more. I just laughed with the novelty of it all until we started going downhill, then the long drop to our right started to get my attention. As our altitude dropped, the snow gradually disappeared thank goodness. We finally had dry roads when we arrived in Cuéllar for our overnight stop.

And that’s where I’ll stop for today – our final post of the trip is approaching fast. Ok, who said thank goodness? Own up! So we want to make it last just a bit longer if we can. 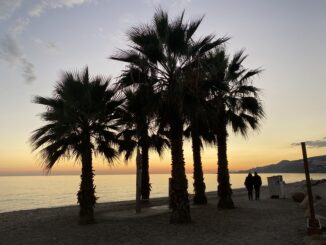 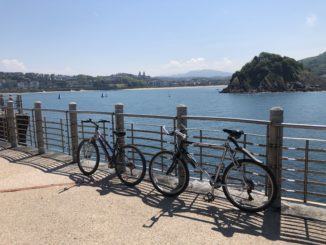 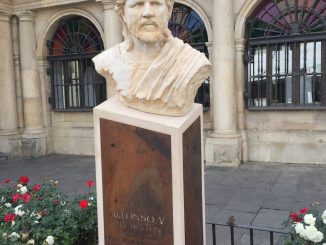