It was never going to end well. I should have thought carefully before saying to Gill on the way to Kingsland, “Even though I haven’t driven Vince for a while it’s so easy just to slip back into the way of allowing for his extra weight and size…” More of which later.

When we spoke last time we’d just settled into our spot by the pond in Pembridge and were enjoying a tipple in the tipping rain. The following day dawned bright and sunny, so after a lazy breakfast where we were joined by a family of mallards – complete with ducklings in tow, we walked the half-mile or so into the village.

Pembridge is one of a number of ‘Black & White’ villages in the county of Herefordshire – it’s easy to see why they’re called that from the pics; it was like stepping back into Ye Olde Merrie Englande. At first we popped into the local gallery for a browse through arts & crafts by local artists without buying anything – a small watercolour of a Robin, for £150? Perhaps not. Walking further through the village I spotted what looked like an old market hall up a side street so we headed that way. We noticed a number of elderly folks sitting on the benches around it who’d clearly just got off a coach with ‘Black & White Village Tour’ on the front.

We sat ourselves down on a nearby bench and tried not to look too obvious as we listened to their guide. Fortunately he was very easy to hear as he had to raise his voice for Doris who was sitting behind us with her brass ear-trumpet. Their coach (rather appropriately) was parked outside Pembridge’s coaching inn which was originally constructed in 1311 but which had been altered and rebuilt many times since then. The open-sided market hall was built somewhere around 1510 and is unique in England for still having its original earth floor. A recent dig there revealed fragments of food brought across from the coaching inn centuries ago. It seems our pensioners weren’t the first to buy their tea and scones from the inn and bring them over to eat in the sunshine! One of the corner posts of the market building stands on an octagonal stone plinth, believed to be the bottom stone of a much earlier Benedictine Preaching Cross – from which the itinerant monks would preach on their regular visits.

We thought after digesting all this free information that we’d better bail out of Vince’s Cheapskate Tours Inc. and leave the pensioner party to continue up the hill to the Church, but not before eavesdropping a few facts; built in the 1400’s it incorporates some Norman arches and windows from around 1330AD. When we wandered up ourselves a little later to look at the church and its unusual detached belfry we discovered that the guide was absolutely right – you know, he was worth every er..penny.

At this point we were getting rather warm and as it was early afternoon we returned to the campsite for lunch, which we took outside under Vince’s shady canopy. We watched a couple fishing in the pond for a while – the fish seemed to be biting and I swear at one point the gentleman landed what looked like a large goldfish.

It was a lovely restful afternoon of reading outdoors, sipping tea and doing a little light house-hunting online. Just what the doctor ordered! At teatime we had another visit from the Mallard family but this time they brought their big friend with them; a snow-white goose with a bit of an attitude. She strode up to our table honking away and demanding to be fed, but in a glaring competition between a goose and an ex-teacher there was only ever going to be one winner. I wish I’d had the phone to hand to take a picture of a dejected bird slinking away with its head down. And I’m not talking about Gill.

Our problems began the following morning heading home. As well as my fate-tempting statement above, I’d also foolishly said, “Let’s take the scenic route back!” Yes that would be the scenic route along the winding country lanes. The winding country lanes with really sharp bends. Really sharp bends which sometimes have telegraph poles right beside the…BANG! Sorry, did that give you a fright? Probably not as big a fright as we got when Vince’s left mirror exploded in a million pieces. Ok I’m exaggerating a bit but poor Gill had to wind the window down and hold what was left of the mirror to stop it bashing seven bells out of the passenger door for about five miles until we could find a lay-by. We actually got off quite lightly. My moment’s inattention could have been much worse; both mirror glasses (there’s a large normal mirror with a second blind-spot mirror below) had popped out, the lower one shattering, and the expensive (but worth it as it turns out) mirror protector cover was nowhere to be seen. It had done its job as the main mirror body just pushed back into place and was perfectly fine. The top mirror glass also clicked back into place so all I had to do was order a new blind-spot glass which arrived today and was easy to fit. We drove back to try to find the mirror protector but to no avail – I suspect that really is in a million pieces somewhere. I’d better order another – just in case I have another expensive lapse in concentration. Poor Vince looks like he’s been in a boxing match with one white ear and one bruised-looking black one!

Rest assured he’ll be back to full health for our next adventure, whenever that may be. If our solicitors don’t get a move on with our house sale we may just up and go off again in the next few weeks. If we do – you’ll be the first to know.

Until then, take care – and watch out for telegraph poles crossing the road 😉 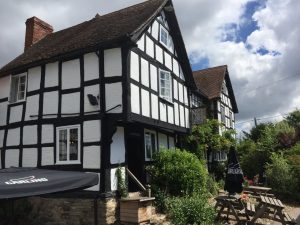 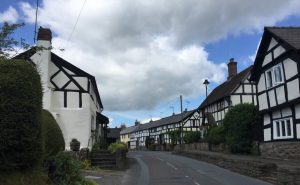 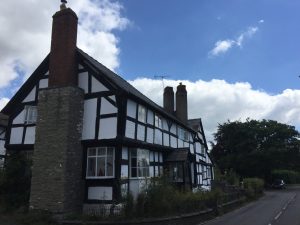 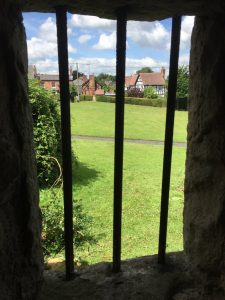 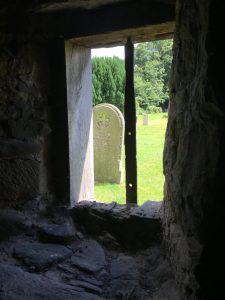