Hello again – how have you been? With everything going on at the moment we haven’t had much time to get away in Vince until now. We’ve had another house sale fall through 😥 , and we’ve been helping daughter number two move home along with assisting Gill’s folks prepare for their own house move which takes place next week, as well as putting our house back on the market. It’s all go!

We felt we could do with a quick break so we took up a recommendation we saw on Facebook and ended up in Hereford. Now, Gill and I enjoy a good row now and again, with pots & vases flying around and lots of swearing and shouting. This recommendation looked ideal with cheap pitches at Hereford Rowing Club. Turns out I got it wrong and it’s something to do with boating. I suppose the clue was in its riverside location… 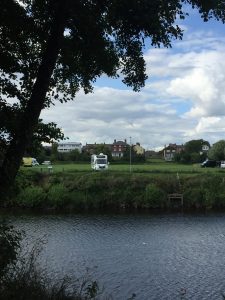 There’s no electric hook-up here but with Vince on a full charge before we left, that’s not a problem – and his solar panel topped us up nicely in the bright sunshine. All the other services are on offer; fresh water, recycling & rubbish disposal and a loo emptying point. There are even clean and warm toilets and showers. This is all for the princely sum of £5 per person per night, an absolute bargain in high season when a Caravan Club site won’t give you much change from £40 a night!

We have the River Wye right in front of us with the town a very short walk away. We risked our lives crossing the main road into town, complaining loudly at the lack of a decent pedestrian crossing before we spotted the handy subway on the way back, oops… 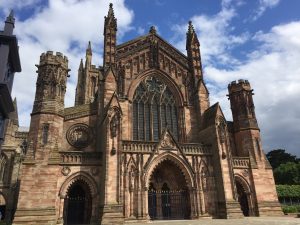 We’ve never been here before but we can highly recommend Hereford for a short break. The Cathedral is one of the best we’ve seen; magnificent but not imposing, welcoming rather than cold & haughty. We went there yesterday and again today as there’s so much to take in. Today the Cathedral Broderers were demonstrating their craft on a set of trestle tables – these ladies maintain or replace the ancient tapestries which hang everywhere. Some depict bible scenes, some show maps of old Hereford, others are beautifully decorated writings in Latin or old English. We reckoned the eight ladies’ combined age was about 1043 – they were absolutely lovely though, and were delighted to explain what they were doing and answer our silly questions with good grace.

The building has many knights in repose, the delicate tapestries mentioned above and we were lucky enough to catch a choir rehearsal for Evensong with the organist playing at full tilt! I had no idea only sixteen voices could blend so beautifully and fill the echoing Cathedral with ethereal music.

Far and away our favourite time was spent in a tiny hexagonal chapel behind an ancient oak door where we found four stained glass windows with the sun streaming through from outside. These are contemporary windows designed by Tom Denny and depict scenes from the life of Thomas Traherne, a 17th century son of Hereford who became private chaplain to Sir Orlando Bridgeman, Lord Keeper of the Great Seal in London in the 1670’s. I didn’t even know there was a zoo in London that far back.

The windows are just gorgeous, their artwork almost three-dimensional. As you sit admiring the scenes, more and more details jump out at you; things you miss at first glance like little moths and shiny green beetles. My photos don’t do them justice I’m afraid.

All our walking worked up a fine appetite so we found somewhere with a hipster specials board and ordered kofta lamb for me and a halloumi salad for Gill. Both were delicious as were the glasses of red wine which accompanied the meal. If I’m rambling a bit (well a bit more than usual) you now know why…

Post-lunch we wandered round Hereford’s local museum which has been exhibiting artefacts and works of fine and decorative art connected with the local area since 1874 (it says here). Gill enjoys fine art far more than I do so while she perused the paintings I looked at the manly stuff like fossils & swords and other shooty and stabby things. I should grow up really. I can honestly say I’ve never seen an exhibit like Jimmy the horse before; a real horse – stuffed. And not a sign of sage & onion.

The black clouds have rolled in and big fat raindrops are coming down so we’re back with Vince now enjoying a lazy late-afternoon read before we start thinking about our evening meal and the run home tomorrow. Consulting my crystal ball I foresee a walk back into town for a pre-dinner pint in the not-too-distant future too.

I’m not sure how long it will be before we can chat again, as I said above our house sale fell through again a few weeks ago. Since then we’ve sold it for a third time but now we trust nobody – we won’t consider it a done deal until the money’s in the bank and we can store the furniture then live in Vince until we find somewhere else. We’re taking him up to Scotland next weekend so we have a little piece of home to come back to when we help Gill’s folks move house. I may even find time for a blog post or two while we’re there – hopefully see you then! 🙂 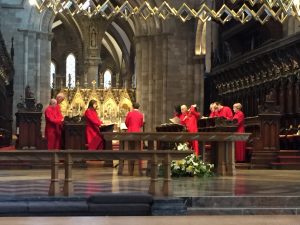 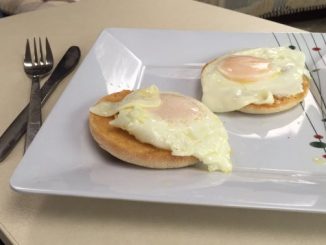 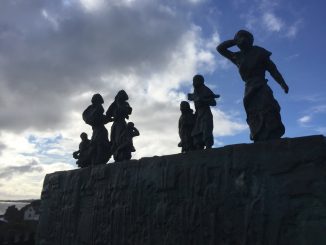 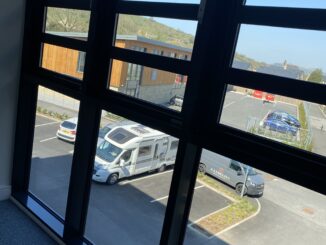 1 Comment on Wye Does it Always Rain on Me?