Two free nights! It’s been a while since we’ve been able to say that but now we’re well and truly back in France there are plenty of aires along the way. When we left l’Eglise Notre Dame de l’Assomption we drove to a free aire in Sauveterre de Béarn with a plan to explore the town the following morning as it was getting late. It was the oddest of aires as we had to approach a crossroads and turn left for the services which we duly did, noting where we could do all our emptying and filling the following day, but there was nowhere to park. Although there was plenty of space, it was marked out with bus bays only. We retraced our steps to the crossroads and luckily spotted a few motorhomes in the road opposite. I’ll never forget that road as it had the most ridiculous, and battle-scarred speed-bumps I’ve ever seen. Even taken at 0.0005mph we heard poor Vince’s fresh water tank scraping over both of them. You’d think that installing a motorhome parking area might have prompted the council to consider the ground clearance needed for a big bloater – or even a motorhome…

Sauveterre de Béarn turned out to be a fairly average little town but with one really interesting quarter, beginning with one of the most moving war memorials I’ve seen. France is very proud, and very respectful of the soldiers who fell in both world wars and every single town or village we’ve been to has a well-tended memorial. Something about this one really stopped us in our tracks as it has a stone sculpture of a grieving mother beside a plaque with a poem urging her to be proud of her lost sons who died for France.

A hundred meters or so along from the war memorial is L’Église Saint André where we went inside for a little reflection, then as we walked over to the church wall – whoa! There was an enormous drop down to the river below. We didn’t realise until then that the town stands on an easily defensible ridge with a chateau overlooking a bend in the river. On the bend stands what looks like a bridge to nowhere, but when it was built in the middle ages it had a wooden jetty to the other side, which has long since disappeared leaving only the first stone arch and pontoon.

This bridge is called the Bridge of Legend and has a fascinating story. The legend dates from 1170 and tells how Queen Sancie gave birth to a still-born child while her husband, King Gaston V, was away. Rumours and suspicions of witchcraft were rife at the time and the townspeople accused her of killing her new-born infant. Her brother, the King of Navarre, ordered that she be tried by water, thus letting God decide her fate. She was taken onto the bridge and thrown into the turbulent waters below, with her hands and feet tied. A sign on the bridge indicates that a crowd of over three thousand locals lined the bridge and the river banks for the spectacle. Sancie incredibly re-appeared from the torrent, washed up on a bank further downriver – unconscious but alive and was therefore judged innocent. In a nicely circular tale she embroidered a cloak as a gift to the Virgin Mary and sent it to the cathedral at Rocamadour which loyal readers will remember from our visit there earlier in the trip!

We met a lovely elderly chap walking along the river – a true hiker with his stick and his rucksack, a big beard, a bush hat and a mahogany tan. He was on a 100 kilometre walk and wondered if we’d seen the signs he was trying to follow. We used our best broken French to explain that, no – we hadn’t seen any, to which he replied (in French) ‘Ah you’re not French then?’ And like so many people we’ve met here then continued to speak to us for four or five minutes in rapid-fire French! He was so gregarious – we saw him several times as we made our way up the steep bank to the upper part of the town, stopping people to ask the way and sharing his Ray Mears tips – we saw him persuade one couple to eat some nasturtium flowers! (Rather tasty actually).

Our next aire was in Marciac. We did make a stop in another town along the way but I’m not going to encourage you to visit by telling you where it was because we felt a little swindled by a restaurant there. We’d sat down and ordered the formule or dish of the day which is a set price, good value lunchtime meal. The waiter took our order, asked us if we’d like a drink, brought the drinks and bread then five minutes later a different waiter popped out to say the formule was sold out and we’d have to order from the standard menu. We ordered salads for the same price as the dish of the day but received two very half-hearted, wilting and overdressed piles of leaves for lunch. Extremely disappointing.

Our disappointment didn’t last long however, with our arrival in Marciac. Totally recommended if you’re passing. There’s a lovely aire with lots of space, a shady wooded area with picnic tables and the usual motorhome services, and it’s only a two-minute walk from the village centre. All the activity in Marciac centres on the large square. All round it are arcaded shops, cafés and restaurants so there’s lots of shade when you’re wandering round. We took advantage of the free Tourist Office wifi to make a FaceTime family call but had to adjourn back to Vince in a hurry for the Wales-Portugal Euro 2016 game. Well done Wales – so much better than the pampered ‘stars’ of the England team.

This morning I popped back into the village to get a baguette – at least that’s what I told Gill, but secretly I was taking advantage of the Tourist Office wifi again to download this week’s Holby; we haven’t missed an episode yet! Once again I had to employ all my computer skills to fool the BBC iPlayer into thinking we were in Milton Keynes as they don’t let you watch or download from abroad… 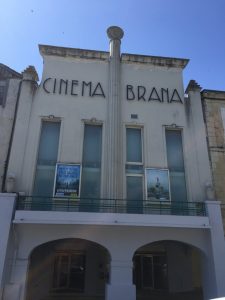 Continuing our mini-tour of the villages of Gascony we went first of all to Vic-Fezensac (nice coffee but not much to see there beyond this lovely old art-deco cinema facade), then to Montréal du Gers in the heart of the countryside. To be honest we were flagging a bit as it’s 31 degrees today and we parked at the bottom of a long hill into town. We cooled off in the lovely old church there, trying to translate the phrases at the bottom of the stained glass windows to understand what they were depicting. We only had the iPhone with us so unfortunately the pics don’t do them justice. We had lunch parked up beside the school where a band practice was in full swing – so we ate to the joyfully out-of-tune sounds of youngsters torturing Chariots of Fire and We Are the Champions. Fantastic!

Back in Vince, air-con on full blast, we set off for our next destination passing field after field of either vines, corn (already being harvested), sunflowers or sweetcorn. All I can say is that the French must REALLY like their cornflakes judging by the amount we saw growing in just one day.

I deliberately didn’t name our final destination for the day above as – dear readers – you’d have been smirking and giggling all the way through, especially you – yes you at the back there. Tonight we are staying in Condom. And I fully intend to rise above the obvious and say it’s a very nice town. Unfortunately our campsite road was closed off due to roadworks so we had to find another about 15k away, which is where I am now, sitting outside with a chilled Sangria and typing in the shade.

As we left the town, I did have time to see the usual exit sign listing all the towns Condom is twinned with: apparently they’ve forged links with Flünke in the Netherlands, Djønni in Denmark, and Pryflačtk in the Czech Republic so fair play to them for taking things seriously.

I shall end this letter from France now as they’re showing the France-Germany match in the bar here and we need to eat first. I’m BBQ monitor today. The match should be fun with so many nationalities staying here – Allez les Bleus! We have one more day to explore Gascony before heading off to Aveyron for the weekend so we’ll add another update in a day or two. 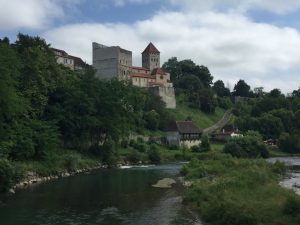 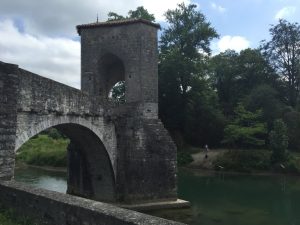 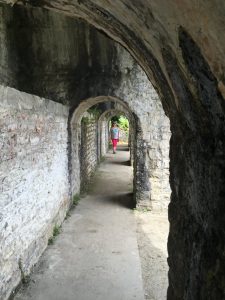 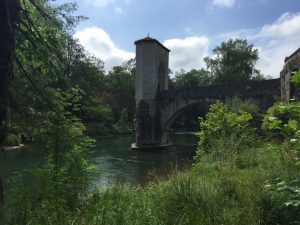 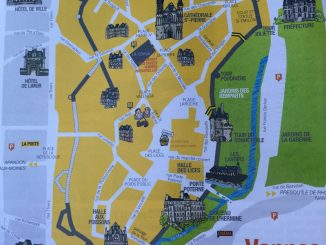 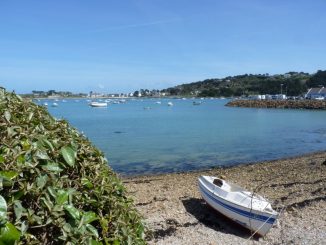 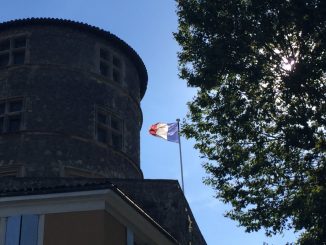