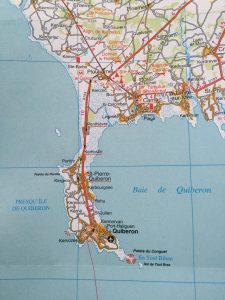 Today Vince is perched on a cliff-top on a spit of land called the Presqu’Île de Quiberon in south Brittany. As I write the rain is hammering down on the roof and the wind is whistling round us as it blows in from the sea – fabulous!

We set off in hot sunshine from Vannes after filling up with fresh water and emptying the waste tank. The batteries were bursting with campsite electricity so we felt good for a couple of days of parking up anywhere we fancy.

I’ve been reading a historical novel about Stonehenge by Bernard Cornwell since we left Blighty and although it’s totally fiction, much of what he writes is based on historical fact. It was appropriate therefore that we drove here via Carnac, a place with over 3000 Neolithic remains – mostly standing stones. I was quite excited (sad, I know) to stop at Locmariaquer where there is a tumulus, a cairn and a fallen standing stone; one of the largest found to date. But of course monsieur, zis is France alors we cleause for ze two hour lunch. Aaaargh! We arrived at 12.10 so didn’t fancy hanging around until 2pm. We walked along the lane with the Megalithic site on our left, hoping to get a glimpse through the hedges but they were too thick and too tall – a bit like me. But what’s this? A double gate in the hedge? With padlock & chain? And a teeny tiny gap beside the gatepost? Well it would have been rude not to! We sneaked into the grounds making sure we weren’t visible from the main building and had our very own private viewing of the neolithic remains AND saved ourselves €11 – result! But don’t tell anybody will you? Let’s just keep it between ourselves.

We drove from Locmariaquer, through La Trinité-sur-Mer (beautiful) and Carnac to get on to the peninsula where we are now. The view from Vince is of the Côte Sauvage – the savage coast, or sausage coast as my iPhone’s autocorrect reckoned! It truly is savage with the waves crashing on to jagged rocks below us. We walked along the cliff-tops in the afternoon to find signs everywhere saying no bathing or fishing – even when calm. Trust me – we weren’t in the least bit tempted.

It’s the May Bank Holiday here too this weekend and we saw signs in Trinité-sur-Mer saying there’s a festival there on Sunday, so we’ll back-track a little tomorrow to find a campsite there and stay for the weekend’s celebrations. 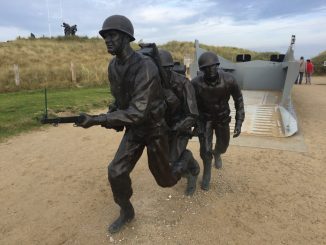 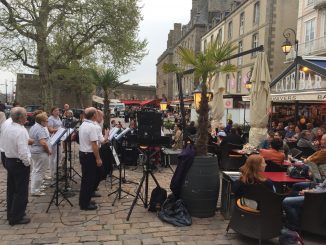 Tide Up in Saint-Malo