This afternoon Vince is sunning himself on a campsite in Kervilor just up the road from Trinité-sur-Mer. Walking back from town this afternoon after a rather liquid lunch I couldn’t stop making up stories about Kervilor the evil alien Emperor who appears in the next series of Dr Who and who is PLANNING TO TAKE OVER THE UNIVERSE AND WE’RE ALL GOING TO DIE!!!

Ahem. Sorry, like I said I may have had an aperitif or two at lunch. And what a lunch – Moules à la Bretonne – mussels in a Brittany cider sauce with little bits of bacon, yes bacon! And chips! And lots of tasty French bread to mop up the sauce. Delicious.

This time yesterday we were still on the Côte Sauvage near Quiberon as our parking permit didn’t run out until 2pm and we like to get our money’s worth. After breakfast we strolled the mile and a half into Quiberon itself for some bread and a nosey round. We’re glad we did as we came across our first street market of the trip and mingled with the crowds sampling lots of different olives, cheeses and cooked meats. We bought a soft cheese for our lunch, one we haven’t tried before – a Machecoulaise for no other reason than that the town of Machecoul is twinned with Shifnal, just down the road from where we live in the Midlands. It was very tasty too – if you imagine a sweeter, more citrus flavoured Camembert you won’t be far off.

We set off for Trinité-sur-Mer straight after lunch, just a short drive away. We decided to save the exploring for Sunday (today) and had a lazy afternoon on the campsite sitting in the sun and on a whim diving into the indoor pool just because we could. Fortunately we saw no sign of Kervilor the evil Emperor.

We had a lovely explore this morning by bicycle. There are lots of wooded tracks which lead you to the many Neolithic remains in the area – yes more standing stones including the Géant du Manio – a 6.5m stone said to be part of an astronomical alignment system which used the Grand Menhir at Locmariaquer as its central point. (That’s the Grand Menhir we sneaked in to see for free the other day).

For our afternoon entertainment I must have misread the poster which I thought said there was a May Day festival here – there wasn’t. But that didn’t stop us enjoying this attractive seaside town. It’s very Cornwall-like with winding streets leading into the centre from the harbour. There is a massive marina and a permanent fish market on the front which – you’ve guessed it – was closed for the Bank Holiday. We had no option but to sit down for a massive lunch which I think is where I came in…

Once I’ve sobered up a bit we’ll get the maps out as we need to be in St Malo on Friday night for the weekend’s Spring tides. There are still a few places in southern Brittany we’d like to see so careful planning will be needed, and being Sunday there are the F1 highlights to snooze through later. 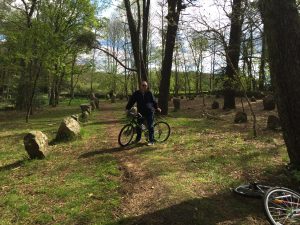 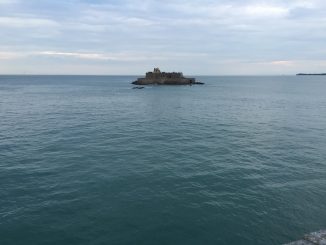 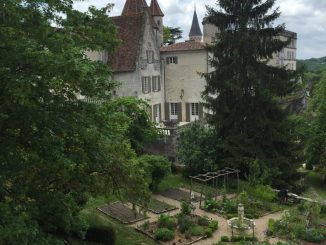 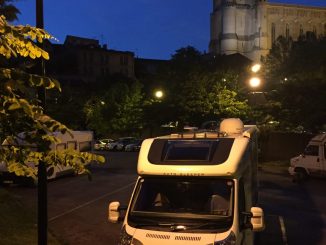