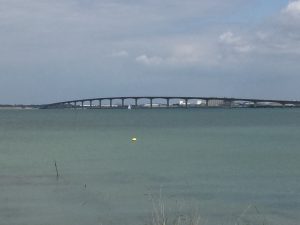 Our last post saw us having a few days in the same place for a bit of a break. On our last day in Rivedoux-Plage we got the bikes out and cycled to the next coastal town along, La Flotte. The French really know how to do cycle paths – this one started along the seafront then dodged inland on quiet roads to begin with then along cycle-only tracks through woods and across fields to our destination. Unfortunately the council seemed to be doing some work on the harbour entrance so the sea had been blocked off leaving the harbour with a only few feet of smelly and algae-infested water. We had a quick coffee and a wander then headed back.

You might remember we were camped near the bridge to the mainland, and I foolishly said that I’d be cycling over it and back and well, a promise is a promise so Gill made me – with the reward of a cool beer on my return. I fired up the headphones, got my pedalling legs on and went for it! The bridge was built in 1988 and is 2.9k (1.8 miles) long. It has dedicated lanes for traffic in the centre with a pedestrian path on one side and a cycle path on the other, both separated from the traffic by barriers. It was a long old slog uphill but an exhilarating freewheel down, only to have to do it all again to get back. A cold beer never tasted so good.

I’d been practising my French at the morning market and not only successfully bought a couple of fresh mackerel for the barbie, but I’d even made the fishmonger understand I wanted them gutted first. I’d sent Gill off to get some fruit though, in case I made an idiot of myself. So while I was enjoying my well-earned beer, I got the BBQ fired up for a tasty treat.

The following morning – yesterday – we both felt it was time to move on so we sat outside in the sun with a coffee, the maps and guidebooks and planned the next few days. We are going to stay for a few days with some friends in Najac from Monday next week so we’ve decided to amble down there via the castles and villages of the Dordogne. From Île de Ré it’s a fair old drive so we decided to have a stopover in Angoulême on the way there, which is where we find ourselves right now. Well not quite. There are no central campsites or aires in Angoulême so we’re five miles or so from the town centre in a village called St Yrieix-sur-Charente. Your guess is as good as mine as to how that’s pronounced! The campsite is surprisingly cheap, perhaps it’s because we’ve moved away from the coast, and is beside a large lake used by all and sundry for recreation; there are boaters, swimmers, joggers and walkers of all ages making the most of the lovely countryside. Best of all it has good satellite reception so no problems catching up with Holby this week. We joined the walkers for an amble round the lake last night, and this morning I got my pedalling legs on again for a couple of quick circuits before today’s main event. 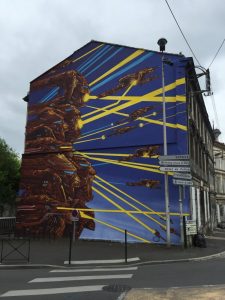 We picked Angoulême for a stopover as it’s said to be Europe’s comic-book capital, growing from its historic claim to fame as a paper-making town. Our Rough Guide said it’s worth a tour so why not? The local authority has embraced the town’s new role by allowing artists to paint cartoon murals all over the place and there is a modern, three-building museum dedicated to the art-form which we decided to visit. Even the street name signs are in speech bubbles! Gill is now the official VincentVanGone bus monitor as she’s very good at working out which bus goes where and when, so we caught the 11:55 numéro neuf into town.

We found ourselves outside the town hall with quite a walk to get to the museum, and only a leaflet with a rudimentary tourist map to guide us. None of the streets seemed to match up to the map but we knew the museum was near the River Charente and rivers are in valleys right? So if we simply went downhill to the river – what could possibly go wrong..? The slight flaw in this cunning plan was that – unknown to us – Angoulême was built on a hill and we were starting from the oldest part of the town. So pretty much anywhere you go is downhill – curses! In the end we had to fight our Scottishness and have a word with Mr iPhone and his exorbitant data charges, but in fairness to him he soon had us on the right track.

As it was getting near lunchtime we decided to have something to eat before the visit:

Right, now they’ve gone off for an alfalfa sandwich I can say we couldn’t resist those big sad eyes on the little calf on the menu, so the veal plat du jour really hit the spot. Veal casserole with a Catalan flan of chorizo and peppers with chopped courgettes in garlic. And only €10 each! Although that didn’t include a small beer and a glass of white wine for the lady.

If you’re a comic-book geek, the Musée de la Bande Dessinée would be heaven on a stick for you. We had no understanding of the history of the comic strip or its role in modern social history until we visited, but after poring over the cases – all in low light and regulated temperatures to preserve the papers and inks – we realised that it’s not just about the pull-out funnies in the Sunday papers; cartoonists have played an important role in political life and in occasionally subverting the authority of the ruling classes. Recent events at Charlie Hebdo show that the genre is still capable of controversy and challenging belief systems.

Oooh that got a bit deep there. There were also some 1950’s comic books banned by the censor for their scantily-clad damsels in distress if that brings this post back down to its usual level? Thought so.

After such a lovely lunch (sorry vegetarians) we’re not very hungry so it’ll be cheese and crackers and a route-planning session before bed. See you tomorrow 🙂 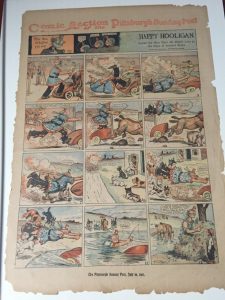 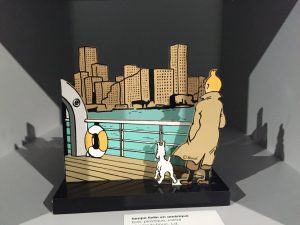 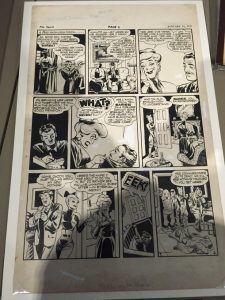 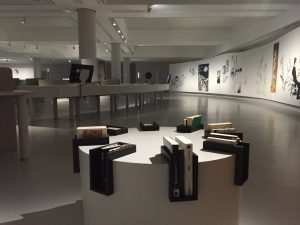 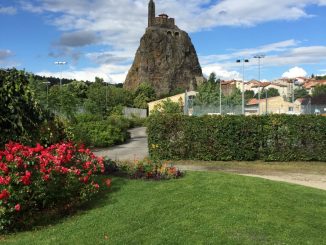 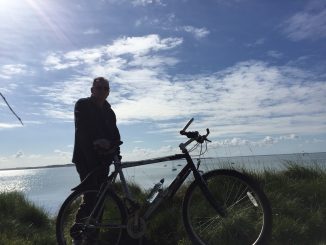 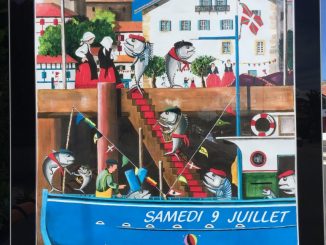 The Life & Times of Peter Piper

5 Comments on Hergé’s Adventures of Vin-Vin